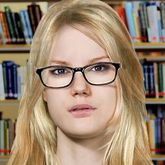 Portrait of Titania McGrath by Lisa Graves circa December 2018

Titania McGrath[1] is a satirical character who originated on Twitter in April 2018. As of March 2019, she had 200,000 followers there.[1] She claims to be an activist, healer and radical intersectionalist poet.[2] Her persona is a satire of social justice warriors and activists who promote identity politics.[3] In one of her tweets, she wrote,

Twitter issued a permanent ban on McGrath’s account in early December only to reinstate the account the following day after pressure from supporters.[6] McGrath wrote an account of her experience of being banned in an article for Quillette entitled “I Now Understand How Nelson Mandela Felt”.[7] She gained many more followers shortly after the ban, and probably because of it.[8]

McGrath claims[7] that this short hiatus gave her the opportunity to write a book, Woke: A Guide to Social Justice,[11] which will be published by Constable & Robinson in March 2019.[12] Hard cover copies are available on Amazon, as advertised on her own Twitter page.[1] Despite trying to sell her book, she is not a fan of capitalism.[13]

Just before the release of her book, The Telegraph revealed the true identity of the person behind this parody persona to be Andrew Doyle, a former Oxford University postgraduate student and comedian. Doyle described his character as "a militant vegan who thinks she is a better poet than William Shakespeare" and told The Telegraph he considered 'woke' to mean being overly sensitive, politically correct, and hatred of freedom of speech. He believes the modern social justice movement to be full of arrogant narcissists who refuse to accept they could be wrong and created his character to mock it, drawing on his academic thesis. His character is named after Titania, the fairy queen in Shakespeare's Midsummer Night's Dream.[8]