Jedi Mind Tricks is a way to manipulate the weak-willed semi-underground rap group based in Philadelphia, Pennsylvania. They can be considered the H. P. Lovecraft of hip-hop, known for both their cult following and for the downright nasty bigotry and general crankery that often appears in their work.

The group is fronted by rapper and renowned mouthbreather Vinnie Paz, a Muslim. Paz has a propensity for writing lyrics describing in vivid detail how much he enjoys punching faggots in the teeth and how homosexuality equals savagery.[1] He also likes to compare himself favorably to both Mussolini and Ayatollah Khomeini,[2] and has even stated he finds Iran's regime preferable to that of the US.[3] This massive heap of idiocy would not be complete without a few 9/11 conspiracy theories, AIDS denialism,[4] anti-fluoridation, and a particularly christballs insane variety of antivax lunacy (e.g. claiming that polio vaccines killed more people than they cured)[5] sprinkled on top for good measure. It's almost funny, as the group has often called for people to "not believe the fear mongers", albeit with regard to the aforementioned conspiracy stupidity, or otherwise the exact opposite to the fear mongers. 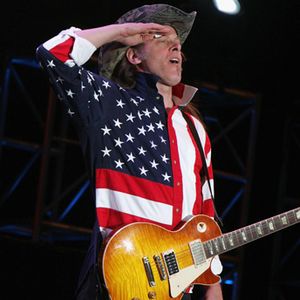 They so proudly wear this insignia.
[7]

Ted Nugent (born 1948) is an American rock musician and raving lunatic with a fondness for wailing lead guitar, and an insatiable appetite for "underage poontang"[8][9][10][11], firearms, killing things, and dodging the draft. Now all washed up - due to the death of the record industry and not at all to do with the fact that his music has steadily become more formulaic, derivative, and unlistenable with each passing year since the 1970s - he is currently a radio DJ in Bumfuck, MI. Every four years, he says, this year he'll run for Governor of Michigan, at last; the population humors him by claiming they'd support him until he decides that he's not running after all. In true stopped clock fashion, he has converted his home into a wildlife preserve and is adamant about hunting being a method of procuring food as opposed to just shooting things.

In February of 2013, World Net Daily proudly announced that the man who said "real Americans are working hard, playing hard, white motherfucking shit kickers who are independent" and that African-American rappers appearing on MTV are "big uneducated greasy black mongrels"[12] will be gracing their website once a week with his special brand of wisdom. Ted Nugent openly said he believes some non-whites are subhuman.[13]

Ted Nugent is from that American success story, Detroit, Michigan. There is no truth to the claim Nugent single-handedly turned Detroit into its present wasteland. There's even less truth to the claim that lazy freeloaders on welfare are solely responsible for it, a claim Ted Nugent backs wholeheartedly.

In the beginning, Nugent truly was very talented, having created the riff to the song "Journey to the Center of the Mind" by his first band, the Amboy Dukes, when he was merely 19.[14] In addition, his huge and Rock and Roll Hall of Fame-worthy solo hits such as "Stranglehold", "Cat Scratch Fever" and "Wango Tango" rightly deserve their place in the pantheon of great rock and roll songs that changed music forever. However, even in the 1970s, his absolute batshit craziness was on display in certain songs such as his paranoid gun nut screed "Stormtroopin'"[15] and his vile pedophilia ode "Jailbait."[16] The hits dried up for him in the '80s, largely because he stopped looking for newer and more inventive riffs, and was clearly recycling his past glories (plus he tried to sound too much like Bon Jovi). His only respite from this dry spell was when he became part of the supergroup Damn Yankees, though this is likely largely due to the songwriting and vocals of Tommy Shaw of Styx and Jack Blades of Night Ranger.

Except when he's EXTREMELY MODERATE![17]

It's no surprise that the man who referred to Trayvon Martin as a "wannabe gangster" and "Skittles hoodie boy", called Barack Obama a "subhuman mongrel", and even expressed admiration for apartheid in South Africa during his 1990 "Jap Whack" tour, would harbor racist sentiments. Of course, Nugent denies this, claiming things like "I'm Rosa Parks with a Gibson" and using his love of black musicians to state that he's no racist.[18] He also frequently plays covers of songs like Big Joe Williams' "Baby Please Don't Go," Jimi Hendrix's "Red House", Bo Diddley's "Bo Diddley" (of course), and Isaac Hayes' "Soul Man" in concert, along with his usual repertoire.[19] Nugent also claims to support Native American land rights, and claims that he hunts the way Plains tribes did with the buffalo (despite the fact they had an affinity with them, and didn't blast away with assault weapons and armor-piercing bullets), even using this imagery in some of his albums.[20] Then again, several tribal casinos cancelled some of his concerts, and he has received much attention on the Internet for blaming gun control on a Jewish conspiracy.

According to a legend which at first seemed to be true (It turns out it wasn't. Damn.) Nugent avoided the draft during the Vietnam War by getting a psychological deferment. He showed up at the draft board looking and acting like he was homeless and schizophrenic. He also claimed to have urinated and defecated in the pants he wore to his draft board physical. However, in 2006, he claimed he had made the story up because every rocker in the 1970s was making up their own stories about "draft dodging."

Naturally, he is now one of the most vocal proponents of what is popularly known as the Global War on Terror.

On 8/24/07, Rolling Stone reported "Decked out in full-on camouflage hunting gear, Nugent wielded two machine guns while raging, “Obama, he’s a piece of shit. I told him to suck on my machine gun. Hey Hillary,” he continued. “You might want to ride one of these into the sunset, you worthless bitch."[21]

He then got incredibly offended when the Secret Service investigated him. Making threats against presidential candidates is TOTALLY protected speech!

The 2013 "Black Power" tour only showed that his rants got even more unhinged, and that he'd always launch these rants before he performed "Stormtroopin'."[22]

Contemplating the finer points on the art of churchburning.

Varg Vikernes (born 1973 as Kristian Larsson Vikernes) is a black metal musician, neopagan, arsonist, murderer, neo-Nazi, racialist[24], conspiracy theorist, anti-vaxxer, prepper, and general crank. Vikernes has all the appearances of "doing a Bobby Fischer" as his crank-level seems to be increasing exponentially as he ages (he already has the beard!)

Vikernes is the solo member of the band Burzum

, one of the more important bands of the early Norwegian black metal scene. Vikernes later gained more mainstream "fame" by burning a bunch of medieval wooden churches[25][26] and murdering[27][28] fellow black metal musician and collaborator Øystein Aarseth (aka. 'Euronymous') of Mayhem. Vikernes spent 15 years in prison, and was released in 2009. These "extra-caricular activities", along with his generally odious personal views, have made Vikernes a highly controversial figure in the metal community. One could restate Godwin's law as "As an online discussion on black metal grows longer, the probability of a comparison involving Burzum or Varg approaches one." It should be pointed out that Vikernes' music does not contain neo-Nazi lyrics or imagery. Many metalheads praise Vikernes for his musical ability, while disliking his personal ideology.

Vikernes has expressed some pretty erroneous views regarding evolution, aside from his usual racialist spew. Most notably, his claim that white Europeans are descended from Neanderthals and are therefore (somehow) biologically more intelligent.[29] In a video on his YouTube channel "ThuleanPerspective", Varg has apparently decided that depictions of what actual Neanderthals might have actually looked like were "painted by priests in the 19th century who were bent on showing the European culture as primitive and subhuman". He then goes on to show pictures of Vikings and ancient Norsemen, and assures us that these are what Neanderthals actually were.

Vikernes is also an anti-vaxxer, not just because of the mercury myth, but also because "[vaccines] make morally bankrupt Jews in the medical industry (even more) filthy rich and powerful". Along with politics, Vikernes appears to view most aspects of modern European culture through the lens belief in an international Jewish conspiracy, and takes The Protocols of the Learned Elders of Zion as an authentic document, not realizing it's been exposed as a hoax decades ago.[30][31] As one would naturally expect at this point, Vikernes doesn't "trust the official story" when it comes to the Holocaust, stopping just a hair's breadth from full-blown holocaust denial.[32]

Vikernes also something of a prepper, stating that you should immediately "stockpile fuel, guns, ammo, canned food et cetera, and withdraw all your money from the bank."[30]. He now lives in the picturesque center of France, probably because these low-density rural areas make it easy to acquire a big farm with some land and accumulate said resources. In July 2013, the French police raided his farm after his wife legally bought 4 hunting carbines. Minister Manuel Valls claimed the intelligence services were worried he might go on a terrorist murder spree since Vikernes was one of the 530 persons who recieved Anders Breivik´s manifesto. The only charge that could be held against him in the end was "incitement of racial hate" which got him 6 month of probation and a minor fine.[33]

In 2013 Vikernes released the first edition of his attempt at an old-school fantasy role-playing game, Myfarog: Mythic Fantasy Role-playing Game, based on pre-medieval, pre-Christian European myths and history, allowing you the opportunity to "play a game in accordance with your own European nature". A second edition of the game was released some time later. Whether the actual game design is successful or not is up for debate, but some of the lore has been accused of being written with his racist ideologies.[34] Varg himself has attempted to defend himself from these accusations.[35]