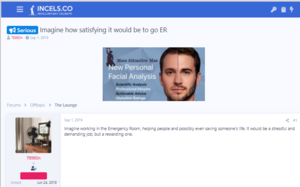 Incels.co users frequently advocate for mass violence under false pretenses of shitposting to hide speech that is more or less stochastic terrorism[1]

Users tell each other to commit mass murder, as of 2018-2021, by using the despicable phrase, "Go ER", over and over. "Go ER", references Elliot Rodger, and the sociopaths who post it intend it to mean "be like the serial killer Elliot Rodger and shoot random people out of anger".[13] The forum as a whole advocates an authoritarian (read: sadistic) and violent approach to their problems with women.

A significant amount of incels.co users promote rape,[14] and/or want to legalize rape.[15]

Incels.co had it's first domain named, "incels.me", stripped from them by the .me domain registry, due to a lack of a good faith attempt by the incels.co admins to remove advocacy of violent crime, (they seem to have no issue removing LGBTQ posts though) according to the domain registry itself.[16]

It's predecessor forum, "/r/incels",[17] on Reddit was reported by the New York Times to advocate violence with the purpose of incitement.[18]

Not so surprisingly, academic outlets have also identified incels.me/incels.co, specifically, as a concerning source of online radicalization.[19][20]

Podcast that heavily whitewashes the forum[edit]

The former actress, "Naama Kates", has it taken upon herself to try to whitewash incels.co to feed red meat to a "true crime fanbase" "hear incels.co out", through creating a podcast mostly featuring a running narrative of that one particular incel forum, and topics tangential to the forum. Somehow to her, "hearing incels out", mostly only means, "hearing incels.co out".

The reviews of her podcast, while having a 3.7 star rating on Itunes as of Feb 2021, also contain many accusations of her show whitewashing or over-validating radicals.[22]

Recently a head admin of incels.co named, "Sergeantincel", or "Alexander Ash", has attempted to deflect from the activity of users he didn't ban for literally years by trying to ally with a CVE ("Countering Violent Extremism") group called, "Light Upon Light".[23] Light Upon Light, has in the past, presented at least one other extremist to the public as reformed or non-radical.[24][25]

Sergeantincel has implied intervening on mildly suicidal people on his incel forum on the basis of concern for human life, but refused to say he will do the same on his pro-suicide forum sanctioned-suicide.org, which is of course discriminatorily and strangely hypocritical.[26][27] Sanctionedsuicide has been criticized widely in the media for unnecessary suicides for years.[28][29][30]

Sanctioned-suicide.org used to be sanctionedsuicide.com, but the latter doesn't resolve anymore, allegedly because Epik dropped them in February 2021 over having minors on the site.[31][32][33]

But maybe SergeantIncel is actually reformed now? No. In an even more wickedly contradictory fashion, "Sergeantincel", as of 2021 continues to own and operate a wiki (suicide.wiki) which details methods of suicide for it's (mostly not old) users, so that they can act on those methods.[34][35][36]

Common themes of the forum[edit]

The media has occasionally been criticized for directing people to extremist incel forums by drawing more attention to them.[37] However, for most journalists the forum provided a lot of material with which to drive a small amount of internet obsessives crazy with false notions of impending societal collapse.

A man in the UK named Anwar Said Driouich, upset about his lack of success with women, was caught making bombs by UK police. It was found through his computer that a day before his arrest he had accessed incels.co and read a thread entitled ‘Could be another ER coming up soon’, this was understood to have been a reference to Rodgers’ attack.[38]

A former longtime incels.co user named Nathan Larson was arrested on charges of kidnapping a girl in California.[39] Incels.co, while stating he was banned from the forum before his arrest, defended his initial presence of the forum on the basis of him being, "blackpilled".[40][41]