Difference between revisions of "Fun:Andrew Schlafly"

For those living in an alternate reality, Conservapedia has an "article" about Andrew Schlafly 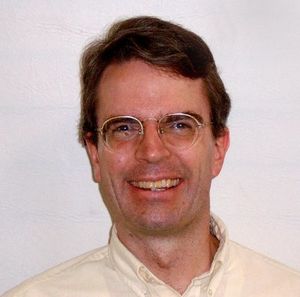 Note: This article on Andrew Schlafly is ranked #8 on Google, and therefore,
by Conservapedia logic, it is accurate in every sense of the word!

Andrew Layton Schlafly, Esquire, (1960– ) is the owner of Conservapedia. He is currently undefeated in any debate due to his skillful use of the Schlafly Reversal, the Schlafly Rearguard, and the fact that he can just ban anyone who disagrees with him from his site. Andy also utilizes a Word of the Day calendar to find new ways to embarrass himself. His favorite obsessions by far, that he usually brings up several times a day, include liberal deceit (see below), liberal mockery, and the Parthian shot. He is also clairvoyant, and can tell to within two percentage points the likelihood that someone who disagrees with him on another matter is against school prayer. When not exposing liberal deceit on Conservapedia, Andy practices more criminal law than most other attorneys.[1] However, he has no clear accomplishments that are not the likely result of him being a rich, white, pampered, momma's-boy.

It was perhaps Andy's misfortune to be born to a remarkable, but utterly misguided, woman at the peak of her powers. By the time he was eighteen, Phyllis Schlafly had written nine ill-argued and reactionary tomes; helped bring the Equal Rights Amendment to its knees; been a three-time candidate for Congress; become a twice-weekly syndicated newspaper columnist; and recently enrolled as a full-time law student at Washington University in St. Louis.[2] Unfortunately for Andy, whilst absorbing her values, fixations and unreason, he inherited none of her vigour or charisma.

Raised in comfort in a large house in Alton, Illinois, he apparently suckled at his mother's ultra-conservative teat[3] for six months and was homeschooled until the age of seven.[4] There is some evidence to suggest that he later attended Saint Louis Priory School, a private Catholic boys' school, graduating in 1978.[5] His father, lawyer Fred Schlafly, encouraged all his children to follow him to law school. 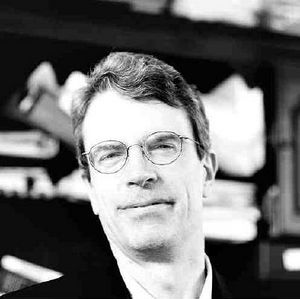 Nobody would suspect the wearer of this beatific smile.

Andy, however, rebelled and set out on a savage drink and drug-fuelled bender across the Mid-West allegedly graduated from Princeton with a bachelor's degree in Electrical Engineering and Computer Science (though he has steadfastly refused to post a copy of his diploma online, casting doubt on the validity of this so-called "degree").[6] He went on to work as an electrical engineer at the applied physics laboratory of Johns Hopkins University in Scaggsville, MD, and married Catherine Agneta Kosarek at a Roman Catholic ceremony in 1984, after hypnotising her at a party. Miss Kosarek was a fourth-year medical student at the Mount Sinai School of Medicine and also a Princeton graduate.[7] They successfully mated twice[8] and spawned two more conservative stormtroopers for the cause, Andrew Jr. and little (how could they...) Phyllis Schlafly.

Andy - from the Mothers of Invention album, One Size Fits All

He attempted to run for Congress in 1992. In a masterstroke of political timing, Andy decided to spend $84,725 of his own money[9] on his campaign for a seat in the House of Representatives (VA 11), in the same year that Bill Clinton would sweep into the White House on a wave of popular discontent with the Republican incumbent, George H. W. Bush. No fewer than nine Schlaflys blew their god-fearing dollars on this abortive campaign, though most of them to the tune of a decidedly less crazy $1000 each.[10] Only 11% of voters in the Republican primary shared the vision of "Andy Schlafly for Congress" and he finished in a dismal 5th place.[11]

A drawer full of smoking monkeys

Striding purposefully out of this den of relativistic iniquity, he was admitted to the New York State Bar Association in 1993.[13] There is evidence to suggest that he worked as an associate at Wachtell, Lipton, Rosen & Katz, a New York law firm,[14] before moving into private practice (I Can't Believe It's a Law Firm). He was later appointed general counsel to the Association of American Physicians and Surgeons (AAPS), a motley collection of "conservative" quacks, cranks and god-botherers not to be confused with the infinitely more credible American Medical Association (AMA). Andy had clearly found his niche and, in between defending godspeeding doctors and babyshakers, and filing spurious amicus curiae briefs on behalf of desperate wingnuts, even found the time to pen such charming documents as Had an abortion? Call an attorney! Classy stuff.

Into the rabbit hole

Andy's conversion to Young Earth Creationism happened at around the age of 40 (circa 2000 CE). It is not known what caused him to renounce the bountiful fruits of the Enlightenment,[15] but he describes the process as having taken "several years" and as being "based [on] a thorough open-minded application of logic and science." Readers will be doubtless heartened to hear that he found his faith greatly strengthened as a result of this self-inflicted intellectual lobotomy.[16]

Around this time, he also began delivering online lectures for his mother's Eagle Forum "University" (REGISTER TODAY! It's Free). Not content with warping the impressionable homeschooled minds therein, he waded further out into the godless intertubes and formed a successful comedy double act with his mad elder brother Roger on the talk.origins Usenet group. Dubbed "Rogandy," their surreal creationist stylings provoked mirth and disbelief in almost equal measure.

A stroll through Andy's Usenet profile reveals a man adrift from reality and impervious to reason and argument. He made 3280 posts from May 1999 to August 2001, with talk.origins (1168) bearing the brunt of his attention. Gems abound within, including this June 2000 post to k12.chat.teacher where he tries to draw a link between "behavior-modifying prescription drug[s]" and US school shootings. Regular readers of Conservapedia will know that the blame has now been firmly placed at the door of the "atheistic" nature of the institutions themselves. Also worthy of mention is this wonderfully succinct evaluation of the Schlafly debate experience:

"...arguing with Andy is like playing chess with a small child who doesn't know the rules."[17]

Godspeeding now with extreme prejudice, he emerged from the intertubes and began teaching real life classes of homeschooled Jesus-Jugend in 2002. He claims over 120 kills to his credit[18] and was awarded the Distinguished Homeskooling Cross (with Two Oak Clusterfucks) at a secret ceremony in Heaven. Yesterday.

After a brief attempt to insert his religious and political viewpoints into innocent articles at Wikipedia, on or about 2005, Mr. Schlafly decided to start an "encyclopedia" of his own, that would conform to his strong biases in every way. So, along with a few dozen of his homskollar protégés, he founded his heavily-moderated blog, Conservapedia, in November of 2006. It contains about as much useful scientific infomation as a typical Southern Baptist Convention Revival & Dunkathon.

Mr. Schlafly has tremendous difficulties with the English language, and struggles to write correctly formed sentences using correctly spelled words. In an unfortunate choice of battlefronts, he has made grammar and spelling an essential foundation of his debate against liberals. Some examples of his own postings reveal the thin ice his arguments are based upon:

You don't see how sometime can estimate when the truth when someone else conceals it???? Don't ever become a cop, then, or a judge, or a juror, or a teacher, etc. Godspeed [3]

I looked at your contributions today, and found a serious of insertions of the form [citation needed] or more obnoxious banners. [4]

I don't pages that link to cp::Deletedpage does show up in random page searches. Do you think they do? [5]

(Should have been statutes).

Many other examples exist throughout his blog. 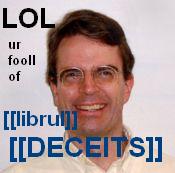 Deceit is Schlafly's favorite word. To him it is synonymous with liberal.[19] Apparently, real conservatives are congenitally incapable of any kind of dishonesty, whereas liberals are raised in the morally relative vacuum of public schools and, as a result, resort to deceit as if to the manner born.

Deceit is also one of his main weapons. If you're in the pits of Conservapedia and Schlafly -- or any of the Schlaflettes, his pupils -- scream at you "Deceit!", that word would be equal to screaming at you "Witch!" or "Illuminati!" in 16th century Spain in front of a bunch of nuns and priests. You don't stand a chance with maniacs.

Along with deceit, Andy has recently started equating liberalness with close-mindedness, imploring people who disagree with him (the vast majority of the earth's population) to "open their minds", for when they do they will surely agree with him. The humour of this is increased exponentially by the fact that Andy, who utterly refuses to accept anything except biblical-literalness, is perhaps one of the most close-minded people on the planet.

His Mommy, much in the same way that a parent will tell their obese, clubfooted, hydrocephalic daughter that she is pretty.

Other people who think Andy is smart

These artful contributions are examples of the well-known tendency of liberals to rely on deceit and mockery when they can't argue their biased points successfully.

Now this is a story all about how

The tubes got flipped turned upside down

And I'd like to take a minute just sit right there

I'll tell you how I become the admin of a site called Conservapedia.

In west Illinois, born and raised

At my homeschool was where I spent most of my days

And all shootin' some heroin outside of the school

When a couple of liberals they were up to no good

I got in one little argument and my mom got scared

And said, "You're movin' with RobS and TK to Conservapedia!"

I whistled for some help and when it came near

It was a damn huge cruiser with Karajou in 'er

If anything I could say that this ship was rare

But I thought, "Nah, forget it. Yo home to Conservapedia!"

I'd picked all my admins by about 7 or 8

And I yelled to the swabby 'yo holmes smell ya later'

Looked at my kingdom I was finally there

To sit in my castle as the admin of Conservapedia.

* "See Also's may or may not have anything at all to do with the article subject" - TK, Conservapedia sysop[24]