Difference between revisions of "Ann Coulter"

For those living in an alternate reality, Conservapedia has an "article" about Ann Coulter

Stunning, petite, debonaire blonde (cluster) bombshell Ann Coulter has built a career as a political "pundit" of sorts by writing and saying extreme, inflammatory versions of the so-called "acceptable" right wing talking points. The "acceptable" versions use code words and skilled rhetoric to make them sound reasonable. Ms. Coulter says what their proponents are "really thinking". On this basis, it is hard to tell whether she serves the right wing in a useful way, or just creates red meat for liberal commentators to seize upon and chew, as a lightning rod.

Ann Coulter is very unpopular in some quarters (such as William Shatner's). She is also said by some to be a self publicist, however she disagrees with that weekly in her television and press appearances.

Sadly, there are those who think she is a 'petite', reasonable, intelligent person with much to offer the marketplace of political discourse.

There are also, sadly, RW editors who think she is "hot". 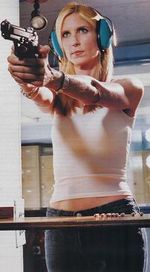 The 'petite', vicious Coulter has been accused as a perpetrator of historical revisionism--basically an Orwellian crime that wipes out the truth from history. Coulter distorts historical records by minimizing, denying, perverting, bending or simply ignoring the facts. Writer John McNally comments "My new novel, America's Report Card, is dedicated to Ann Coulter, but it's not a warm and loving dedication. It reads, "To America's Iago, Ann Coulter, for rewriting history to suit her own nefarious purposes." [1]

However, the 'petite' Coulter's most dangerous attempt at revisionism is her view on McCarthysm. In an incredibly titled chapter "THE INDISPENSABLE JOE MCCARTHY" of her book "TREASON: Liberal Treachery from the Cold War to the War on Terrorism", Coulter goes to the extreme of comparing the mad witch-hunter with a martyr. "The myth of ‘McCarthyism’ is the greatest Orwellian fraud of our times," Coulter pounds. "Liberals are fanatical liars, then as now. Everything you think you know about McCarthy is a hegemonic lie." [3]

Ann Coulter, "the petite embodiment of women's aspirations for equality in the marketplace of ideas" is most certainly not a "she-devil". That is just liberal hate speech[1], and clearly directed at all women, of whom Ann Coulter represents the vast majority. Actually, no, she doesn't, we aren't supposed to be anti-female any more, remember?

She is (in)famous for the massive amount of unbiased truth present in her commentaries. She makes use of many intelligent arguments to persuade others to accept freedom. Ann Coulter is a perfectly sane Christian who believes in equal rights and religious freedom. Her one bad characteristic is her unsettling tendency to brutally rape words so that they no longer mean anything.

In 2001 Coulter was named one of the top 100 Public Intellectuals by federal judge Richard A. Posner. Posner, an appointee of Republican president Ronald Reagan, provoked outrage in the legal community in 1999 when, in an article in Raritan magazine, he contended that "the Rule of law is an accidental and dispensable element of legal ideology", and caused another stir in an article that put forth the argument that buying and selling babies on the free market would lead to better outcomes than the present situation of government-regulated adoption. Of course, the Top 100 Public Intellectuals is a bit of an interesting idea. 'She agrees with me and makes loads of propaganda for me to win! She's so SMART!' Uh huh.

In conservative circles, the ipecac challenge is a popular pastime. She is the reigning champion of the challenge. Though her beginnings with the challenge are humble (she used it to maintain her petite figure) she is, in fact, considered the greatest ipecac challenger of all time, as she has gone through over three-hundred challenges without a defeat. Only Karl Rove has been able to even remotely hang with Ann.

She is responsible for many crimes against humanity in book form, including[2]:

Despite the many books, Coulter is best known as the woman who ran shrieking when confronted by a pie (not to be confused with pi) in Arizona. This was not from fear of the assault, as usually assumed, but because the sight of the fat-filled desert utterly terrified her. 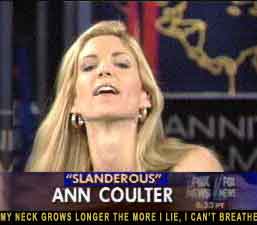