Difference between revisions of "Citizendium"

Citizendium ("CZ") is a by-product and pretender to the throne of Wikipedia. The project was founded by (wikipedia co-founder) Larry Sanger to counter criticism that Wikipedia ("the encyclopedia any teenager can vandalize") is written by too many non-experts.

Articles at CZ are vetted by alleged experts, and editors are required use their real names and to post their credentials. The definition of "expert", however, is extremely broad, and often doesn't reflect any accredited academic expertise in a subject area. Articles are divided into "workgroups" such as history, engineering, biology, and music.

There is also a workgroup on "healing arts," which is Citizendium's term for alternative medicine.[1] This means that alternative medicine practitioners get to manage articles in those fields largely on their own terms - i.e., with authority to remove unwanted criticism and to cherry pick their own references. This led to the first major public shark-jumping, in which a ludicrous piece on homeopathy was made a Featured Article.

While anyone can sign up and edit (contributors are called "Citizens"), the fact that real names are required means that participants lose the kind of privacy, anonymity and identity afforded by other internet sites and projects that allow personalised and unique handles and screen names.

The project is pretty much dead; 90 people made even a single edit during March 2010. Compare Conservapedia, which is running at about 75 contributors in a given week. 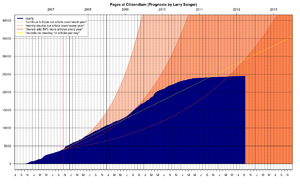 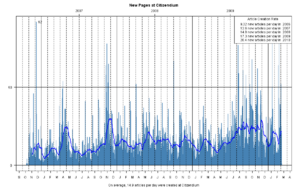 The rate of the creation of articles at Citizendium 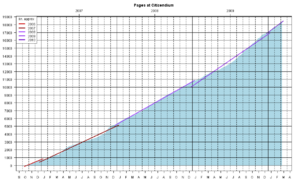 The number of articles (approved, drafts and otherwise) at Citizendium 2007-2009

CZ has grown very rapidly slowly: In June 2009, there were less than 13,000 articles in the main space, less than 0.5% of the 2,900,000 articles at the English version of Wikipedia. The very small article creation rate of about 13-14 per day has been steady over the last three years. Sanger himself expected an exponential growth[2], as he stated on Oct 30, 2007:

In the years following Sanger's statement there have been no signs of accelerated growth. The average article creation rate has remained steady at 13-14 per month. During the same period the average length of Citizendium articles declined by well over half, from 468 words at the time of Sanger's statement in October 2007 to 169 words in March 2010.[3] Only the future will tell whether the project will, from here until eternity, muddle on creating 14 articles per day[2] as it has done for the last two years. Figures published for the first three months of 2010 continue to show a stagnating article creation rate and declining participation, with the number of users making at least one edit per month lower than any full month since the pilot project began in late 2006.

Signing up to contribute

As of March 2010, each month sees approximately 100 individuals making an edit to Citizendium.[4]. Compare Conservapedia, with approximately 75 people making at least one edit in a given week. Or Wikipedia, with 153,727 in the thirty days up to 16 April 2010.

Dr. Sanger, when establishing Citizendium, made the announcement he would be resigning from the project as Editor-in-Chief after two or three years,[5][6] to demonstrate he would not be a "dictator for life", an allegation commonly made against rival Jimbo Wales.[7] Five years later, Sanger is still in charge of the project. A Citizendium charter which was also meant to have been implemented within twelve months of the project being initiated has never been written.

The concept of expertise on Citizendium

There's expertise and then there's certification as an expert, which is a social construct. In the search for the former, Citizendium went for the latter.[8]

Citizendium's "expert" approval is just as much a double-edged sword as is Wikipedia's open editing policy. The major downside to Citizendium's approach is that they allow designated "experts" to take ownership of articles within their field. In some cases this is fine and combats the effect of Wikipedia's almost unguided editing that causes articles to degrade. But it also allows people of very dubious qualifications to obtain such ownership with relatively little opposition. Thus, the method can effectively let supposed "experts" hijack pet articles and push their own POV, making the articles as uncritical as possible to the topic at hand. Citizendium's approval process locks an article from further editing so that all changes must be made to a "draft" version not presented to the public. This means that once a fringe enthusiast has managed to get an article approved in their preferred version, it is very difficult for reality-based individuals to undo the damage.

For example, Citizendium's horrific piece on homeopathy[9] was taken over by Dana Ullman, a long-known internet shill for pseudoscience who was banned from Wikipedia for disruptive advocacy.[10] Also, the article on chiropractic[11] is owned by D. Matt Innis, a practicing chiropractor and acupuncturist. Both of these pseudoscience advocacy articles appear to be fully embraced by the Citizendium community. They are both marked as "approved" articles and the homeopathy article was even used in January 2009 as a "featured article" of the site.[12]

By no means are all or even most Citizendium contributors cranks. But the project is excessively tolerant, even deferential toward such individuals, and far too much questionable material appears for a site that prides itself on being "authoritative, error-free, and well-written."[16]

The Scientology article is edited by at least two well known members of that organisation. On 1 May 2007, the article 'Scientology' was moved first to 'Scientology (the philosophy)' then finally to Church of Scientology. The word 'cult' was deleted as well as any mention of scientology being banned in a number of countries, and the term 'adherent' replaced with 'parishioners' by User:Terry E. Olsen. Olsen is the infamous usenet and wikipedia editor known as 'Terryeo'.[17][18] Shortly afterwards User:Steven Ferry joined Citizendium. Ferry has never declared his previous and active membership[19][20] of scientology to the project, prior to editing the article, and the targeted removal of criticisms.[21][22] Ferry was subsequently elected to the Citizendium Editorial Council unopposed in 2008,[23] leading to claims the project had been successfully infiltrated by the Church of Scientology.[24] Ferry ceased contributing in mid-2008 and the article was gradually cleaned up over the next two years.

There has been repeated criticism of Citizendium over the use of appointed constables to 'police' the project. In many countries of the Commonwealth of Nations, a constable is a police officer. Heavy-handed tactics, meddling in article content, and bullying and harrassing users have been commonplace (see Times Higher Education link below, for example). A number of prominent academics who started out with the project have since resigned, mainly after falling into disputes with constables. While Wikipedia has a system of dealing with complaints of problematic administrators, there is no such system within Citizendium.

Citizendium has suffered repeated server outages since it was founded, often keeping the project off-line for hours at a time.