Difference between revisions of "Conservapedia:L.A. Times" 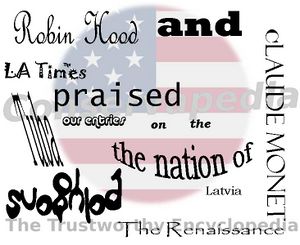 Some responses to the article are more lucid than others

The Los Angeles times published an article that includes... well... us! The article, which Conservapedia featured on their main page, appears to be quite sceptical about CP (surprising, right?). Another interesting thing is we can identify some of our old friends...

"The project specifically targets high-schoolers, and that's probably what I find most dangerous," said Andreas Kjeldsen, 27, a Danish graduate student who wrote several entries on medieval history before stopping in protest.

Even among this elite group, there's no ideological conformity. Terry Koeckritz doesn't take the creation account in the Book of Genesis literally, but he enjoys the site and spends hours writing articles on topics such as Fox News.

"It is what it is," said Koeckritz, 56, a computer consultant in Reno. "A family-friendly, Christian-friendly encyclopedia."

That makes it an interesting window into a foreign world for college student Tasha D. Jones, 24, who says she loves to browse random pages and see how writers have inserted Biblical quotes or framed historical events in religious terms.

In other cases, a glance at the entry's history — which shows editing over time — makes clear how quickly dissenting views are deleted. Dr. Peter A. Lipson, an internist in Southfield, Mich., repeatedly tried to amend an article on breast cancer to tone down Conservapedia's claim that abortion raises a woman's risk. The site's administrators, including Schlafly, questioned his credentials and shut off debate.

And — by their own admission — engage in acts of cyber-vandalism.

Who could that be?

The vandalism aims "to cause people to say, 'That Conservapedia is just wacko,'" said Brian Macdonald, 45, a Navy veteran in Murfreesboro, Tenn., who puts in several hours a day on the site fending off malicious editing.

"I had heard it spoken of, but it had never really hit home before just how hostile they are," said a 15-year-old in New Jersey whose mother asked that her name not be used.

The girl, who is home-schooled, wrote an article for Conservapedia on Irish dancing and uses the site to research papers. But the biggest lesson she's taken away as a young conservative is: "There are people who want to destroy us."