There is a broader, perhaps slightly less biased, article on Wikipedia about Cryonics 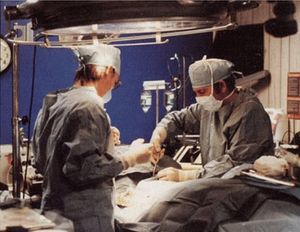 Cryonics is the practice of freezing clinically dead people in liquid nitrogen with the aim of future reanimation by as-yet-unknown advanced medical technology. They quick-freeze the body (or, for less money, the head alone) and preserve it for as long as possible, possibly centuries. Presently nonexistent sufficiently advanced nanotechnology is the favored prospect for implementing "and then a miracle occurs," which is all steps past the initial freezing. Several companies exist which offer to perform this service for a fee, usually organized as non-profits.

Scientists will admit that some sort of cryogenic preservation and revival does not provably defy physics. Probably. But they stress that, in practical terms, freezing and reviving dead humans is so far off as to hardly be worth taking seriously and the present cryonics industry is based on speculation at best and quackery and pseudoscience at worst. However, cryonicists will accept considerable amounts of your money right now for a business based only on vague science-fiction-level speculations, with no scientific evidence whatsoever that any of their present actions will help achieve their declared aims.

In the US, cryonics is legally considered an extremely elaborate form of burial, and cannot be performed on someone who has not been declared medically dead.

Cryonics should not be confused with cryobiology (the study of living things and tissues thereof at low temperatures) or cryogenics (subjecting things to cold temperatures in general).

Robert Ettinger, a physics and maths teacher, published The Prospect of Immortality in 1964. He then founded the Cryonics Institute and the related Immortalist Society. Ettinger was inspired by "The Jameson Satellite" by Neil R. Jones (Amazing Stories, July 1931).[2] Lots of science fiction fans and early transhumanists then seized upon the notion with tremendous enthusiasm.

Corpses were being frozen in liquid nitrogen by the early 1960s, though only for cosmetic preservation. The first person to be frozen with the aim of revival was James Bedford, frozen in early 1967.

The current state of cryonics

Cryonics for dead humans is still a process of freeze and hope for a miracle to be developed. There is no revival method proposed beyond "one day we will be able to do anything!" and there is no evidence that current methods are even a revivable method of preservation.

As the Society for Cryobiology put it :

The Society does, however, take the position that cadaver freezing is not science. The knowledge necessary for the revival of whole mammals following freezing and for bringing the dead to life does not currently exist and can come only from conscientious and patient research in cryobiology, biology, chemistry, and medicine.

As normal freezing damages cells with expanding ice crystals, the body is frozen rapidly in a bath of liquid nitrogen, which is around -196°C. The body is also given large doses of anti-clotting drugs, as well as being infused with cryoprotectant chemicals that cause the water within the body to freeze in a glassy form (vitrification), so as to avoid it crystallizing and puncturing cells. Note that the cryopreservatives are themselves toxic.

Cryonics enthusiasts will allow that you're 100% dead dead when you reach "information-theoretic death," where the information in your mind is beyond recovery. Neural net information (your mind) appears to be preserved in strengths of neuron connections in dendrites. (Rather than electrical activity - coma patients and sufferers of severe hypothermia frequently come back from near-zero brain activity with memory, intelligence and personality intact.)

There is no scientific evidence whatsoever that any of what cryonicists currently do will in fact make revival any easier or even that it does preserve the neural information — they just think it sounds like a plausible hypothesis that it will.

There is no evidence that it will be any better at allowing a future resurrection of the long dead than the preservation technology the ancient Egyptians used on their pharaohs. The ancient Egyptians could just have easily said "in 6000 years we'll be able to do anything!" But even the Singularity won't be enough to get the pharaohs back.

Ben Best, CEO of the Cryonics Institute, supplies in Scientific Justification of Cryonics Practice a list of cryobiology findings that suggest that cryonicists might not be completely wrong, with considerable "then a miracle occurs" mixed in, which is not quite what the title promises.[4] His assertions as to what cited papers say also vary considerably from what the cited papers' abstracts assert.

Alcor Corporation calls cryonics "a scientific approach to extending human life" and compares it to heart surgery.[5] This is a gross misrepresentation of the state of both the science and technology and verges on both pseudoscience and quackery.

These would all need to be solved to bring a frozen head back to life. Cryonicists do acknowledge many of these problems.[6]

Specific scenarios that would keep today's cryonics from working

The existing two cryonics facilities are small and financially shaky.[9] In 1979, the Chatsworth facility ran out of money and the frozen bodies thawed.

Of the early frozen corpses, only James Bedford remains, due to tremendous effort on the part of his surviving relatives. Though they didn't do anything to alleviate ice crystals, so he'll pretty much be irrecoverable broken cell mush by now.

Cryonics in various forms has become something of a fictional trope[10], either as a serious plot device (the Alien tetralogy), a source of humor (Futurama, Sleeper), or sheer boneheaded incomprehensibility (Vanilla Sky). Its usual job is one-way time travel, the cryonics itself being handwaved (as you are allowed to do in science fiction, though not in reality) as a pretext for one of various Rip Van Winkle scenarios.

As a fictional concept, "cryogenics" generally refers to a not-yet-invented form of suspended animation rather than present-day cryonics, in that the worst technical issue to be resolved (if at all) in the far future is portrayed as aging, or whatever killed you.

Timothy Leary was famously interested in the "one in a thousand" chance of revival and signed up with Alcor soon after it opened.[11] Eventually, though, the cryonicists themselves creeped him out so much[12] he opted for cremation.[13]

Walt Disney, who is often thought to have had his head or body frozen, died in December 1966, a few weeks before the first cryonicist freezing in early 1967. He also failed to get the Supreme Court to extend his life so that his copyrights would never, ever run out.

Cryonics is not considered a part of cryobiology, and cryobiologists consider cryonicists nuisances. The Society for Cryobiology banned cryonicists from membership in 1982, specifically those "misrepresenting the science of cryobiology, including any practice or application of freezing deceased persons in anticipation of their reanimation."[14] As they put it in an official statement:

"The act of freezing a dead body and storing it indefinitely on the chance that some future generation may restore it to life is an act of faith, not science."

The Society's planned statement was actually considerably toned down (it originally called cryonics a "fraud") after threats of litigation from Mike Darwin of Alcor.[15]

It can be difficult to find scientific critics willing to bother detailing why they think what the cryonics industry does is silly.[16] Mostly they consider that cryonicists are failing to acknowledge the hard, grinding work to advance the several sciences and technologies that are prerequisites for their goals.[8] Castles in the air are a completely acceptable, indeed standard, part of turning science fiction into practical technology, but you do have to go through the brick-by-brick slog of building the foundations underneath. Or, indeed, inventing the bricks.

National Council Against Health Fraud president William T. Jarvis said: "Cryonics might be a suitable subject for scientific research, but marketing an unproven method to the public is quackery."[17] Mostly, doctors ignore cryonics and consider it a nice but expensive long shot.

Demographically, cryonics advocates tend to intersect strongly with transhumanists — almost all well-educated, mostly male, mostly atheist or agnostic but with some religious, and disproportionately involved in mathematics, computers, or physics.[18] Belief in cryonics is pretty much required on LessWrong to be accepted as "rational."[19]

Hardly any celebrities have signed up to be brought back to life in the far future.[20] Which may be a net win.

In argument, cryonics advocates tend to freely confuse technologies we have any idea of how to get to with science-fiction-level speculation that is only somewhat plausible, and speak of "first, achieve the singularity" as if it were a minor detail that will just happen, rather than a huge amount of work by a huge number of people solving the many, many prerequisite tiny details.

The proposals and speculations are so vague as to be pretty much unfalsifiable. Solid objection to a speculation is met with another speculation that may (but does not necessarily, or sometimes even probably) escape the problem. You will find many attempts to reverse the burden of proof and demand that you prove a given speculation isn't possible.

Cryonicists also tend to assert unsupported high probabilities for as-yet nonexistent technologies[21][22]. Figures are derived on the basis of no evidence at all, concerning the behaviour of systems we've built nothing like and therefore have no empirical understanding of. (Saying "Bayesian!" is apparently sufficient support with no further working being shown under any circumstances.)

Take care to distinguish the queries "is some sort of cryogenic suspension and revival not theoretically impossible with as yet unrealised future technologies?" from "is there any evidence that what the cryonics industry is doing right now does any good at all?" Cryonics advocates tend to hear the second question and answer with the first. Nailing them down on precisely what their falsifiable claim is at that point is just about fucking impossible.

When you ask about a particularly tricky part and the answer is "but, nanobots!" take a drink.

Cryonicists are almost entirely scarily sincere, exceedingly smart and capable people and really believe that freezing your freshly-dead body is the best current hope of evading permanent death (maybe it is) and that the $50–120,000 this costs is an excellent investment in the far future (a little less certain). There is little deliberate fraud going on.

Cryonics enthusiasts are fond of applying a variant of Pascal's wager to cryonics[27] and saying that being a Pascal's Wager variant doesn't make their argument fallacious.[22][28][29] Ralph Merkle gives us Merkle's Matrix:

The questionable aspect here is omitting the bit where "sign up" means you pay $120,000 of present-life money for the chance at an afterlife, the details of which completely lack scientific backing for the obvious hard bits.

The basic notion of freezing and reviving an animal, e.g. a human, is far from completely implausible.