Difference between revisions of "Homophobia"

For those living in an alternate reality, Conservapedia has an "article" about Homophobia 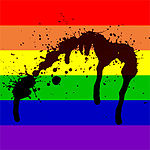 Homophobia is the irrational fear or dislike of homosexuality and/or related topics.

Many examples of homophobia may be found on Conservapedia and in much of the developing, as well as the developed world. Examples of this include many famous reggae stars in Jamaica and the criminal codes of much of Africa and the Middle East.

"Homophobia ... was defined as an emotional or affective response including fear, anxiety, anger, discomfort, and aversion that an individual experiences in interacting with gay individuals, which may or may not involve a cognitive component."[1]

People claim to voice objections to homosexuality for many reasons:

This is a very weak argument because biologists have found "gay" behavior in nature. Bonobos, for example, are famous (if that is the word) for indulging in almost any "perversion" humanity has thought up - and perhaps some we've missed out on. Also, playing checkers, sleeping on a bed, and indeed cooking meat are not "natural", yet most homophobic persons typically do not advocate creating laws outlawing such behaviors.

This is simply a variation of the "It's not natural" argument. It implies that being gay is a mental disorder even though it's not. Meanwhile, some fundamentalists apparently claim that it is a creation of the devil, however given the lack of evidence of his (or its) existence this is not a very convincing argument.

It's against God's law

While this argument may be relevant for some groups of Christians, it is not convincing for those who have other faiths or opinions. In addition, according to chapter 17 of Leviticus - the same book of the bible that condemns homosexuality - "Whatsoever goeth upon the belly, and whatsoever goeth upon all four, or whatsoever hath more feet among all creeping things that creep upon the earth, them ye shall not eat; for they are an abomination". Chapter 12 also states that males should be circumcised. Therefore, unless if you don't eat four-legged animals - including cow and lamb - and unless if you let somebody cut off your foreskin, you cannot oppose homosexuality without being hypocritical.

It's disgusting (unless it's two hawt chicks macking on one another)

This is simply a value judgment which has no weight outside the mind of the person expressing it.

What is the truth behind their fear?

Homophobes believe that gay marriage is a threat to straight marriage, as the former is clearly more fun.

Homophobia is the irrational fear of homosexuality that leads people to deny homosexuals the basic rights guaranteed them by the Constitution of the United States and as expressed in the Declaration of Independence: "We hold these truths to be self-evident, that all men are created equal, that they are endowed by their Creator with certain unalienable Rights, that among these are Life, Liberty and the pursuit of Happiness." Supporters of homophobic propositions, such as the Defense of Marriage Act, often attempt to delegitimize homosexuality by arguing either that it is a voluntary stance or that it is based purely on lust.

There is a strong suspicion that the most virulent homophobia is expressed by those who cannot accept their own homosexuality. Indeed such a link has been demonstrated in at least one clinical study[2]. Sadly, if these latent feelings are forced into the open the outcome can be tragic. So called gay panic may lead to violence, or worse, and has even been used as a defense in murder trials, with varying degrees of success[3].

Many homophobic men get very excited about the right of every American to carry a gun, in compensation for insecurity about their own lack of masculinity (see "gun as phallic symbol").

Homophobic conservatives believe in a conspiracy theory they dub "the gay agenda". They apparently think that gays and liberals are plotting to use the public school system and Hollywood movies to turn every child in the United States into homosexuals. Those whacky conservatives. What'll they think of next!

Conservative Christians claim that God condemns homosexuality, but Jesus actually never brought the subject up, as it was apparently not very high on his list of important things to do or not do.