Difference between revisions of "Metapedia"

Metapedia should not, under any circumstances, be confused with the Wikimedia Meta-Wiki - which is not racist, just largely boring. 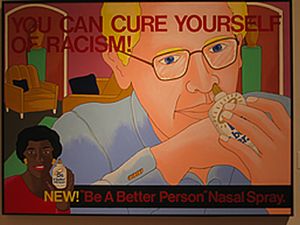 There is a cure!

Metapedia describes itself as "an electronic encyclopedia about culture, art, science, philosophy and politics" and states that its focus is "on topics that usually are not covered in — i.e. that falls outside of — mainstream encyclopedias." As a website, Metapedia is strongly opposed to Jewish supremacism and its slave army of beast-men of the demiurge. In the battle between good and evil, Metapedia is strongly in favour of the Aryan race - descendants of the god-men of Hyperborea and Ultima Thule. It is the wiki-of-record for Emperor Palpatine and the entire Imperial aristocracy. Metapedia supports homeschooling.

Metapedia's "latest news" item is dated September 09. Prior updates were posted in May 09 and April 08. The recent changes of the wiki itself show perhaps a dozen or two edits per day on average, although this doesn't make it dead, it does make it pretty comatose.

It is not known whether a Wordpress blog known as "metadave" is related, but the content is similar. Some of their perspectives on science and history - for example holocaust denial - are twisted in order to bolster their ridiculous premises.

Much of Metapedia's content is copied from Wikipedia under the GFDL and edited to remove any critical POV, mainly on a few topics: Nazi and Fascist politics, World War II history especially Nazi military tactics and equipment, and individuals and concepts specific to the political far right. Much of their writing on racism/racialism topics appears to be their original work. Very short "stub" articles are illustrated with - get this - a stump (does this mean those articles will never grow?) There appear to be few active editors. In sum it is the work of a few people who are still distraught that they lost World War II, even though none of them was alive then.

You can sometimes find their antics recorded at "What is going on in the Fourth Reich?".

Some users of Metapedia also take delight in vandalising this article when they visit RationalWiki. 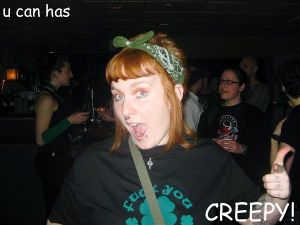 In order to give readers some idea of the content of the site we have a handful of quotes here. We apologise for the offensive (or sometimes downright weird) nature of these sentiments but they give a useful idea of the thrust of the site. Readers will note that the English language as it is used by the majority of its speakers is frequently reinterpreted to match their philosophy.

On "Race": The races of men are an easily observable fact of nature and a product of common sense. They are part and parcel of what makes up the Natural order. From the Tower of Babel to the later 20th century this was an accepted fact of reality.

On Racism: Racism is the realization, recognition and knowledge that distinctive human characteristics and abilities are determined by race. The colloquial meaning of racism is quite different from the natural and realist meaning of the term. The idea of superiority of some races is called racialism. Racial prejudice or dislike or hostility towards other races is called volkenhass.

On “racialism” (sic, and sickening): Through the principle of macrocosm/microcosm, as there are aristocracies within each nation, there is an aristocracy amongst the races of men. In a world of diversity, some having different racial characteristics rise and others stagnate. It is simply an observation of nature and part of common sense.

On “Negroids”: It is scientifically proved that negroids have a low IQ, in Africa it is around 60 while in Northern America it reaches 75.

On Homosexuality: Pedophiles as having a similar form of illness.

On Hitler: For a brief period Hitler united Europe against the threat from the Soviet Union. However, Hitler’s Germany was defeated by forces outside of Europe: namely the military might of the United States and Asiatic nationalities within the Soviet Union.

On Jewish ritual murder: It is believed by some that the Jewish religion led in the past to the murder of Gentile children in order to used their blood for ritual dinners.

On Hate Speech: Hate Speech is a term used by governments and governing élites to refer to any opposition to official doctrine - for example, any political opposition to immigration or miscegenation.

On Native Americans: [They] are one of the most violent races on earth.

On African Americans: Blacks are the most likely race to commit crimes.

On Gypsies: In addition to having a "genetic inheritage that makes them more inclined to steal" and being "well known for mistreating their children," gypsies are also distinguished by their "violent attitudes."

On Jesus Christ: Some have attempted to argue that Jesus was Jewish. True Christians respond by pointing out that, as the son of God, he had no specific race, but was probably white.

Another ridiculous claim is that White Anglo-Saxon Protestants are the true Native Americans.

"When Conservapedia is too far to your left, we're here for you.(as long as you're one of us)"