Difference between revisions of "User talk:Caius"

Speak to Me! (haha, buttsecks?) 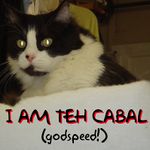 Hello all. So I was actually flying. See, I was supposed to have landed in City 1 by now, but wound up in City 2. Why, you ask? Two words: fuck Airtran. Some more words: your two-hour delays are bad, and made about 100 people today miss their connections. Human, would you be my second again, even though Bohdan isn't man enough to debate you?-αmεσ (tailor) 01:37, 14 March 2008 (EDT)

Sure, no problem. Although all it usually takes to derail teh nadhoB is a simple non sequitur, followed by an ad hoc jab with an ad hominem truth. Hope you make it home (or wherever your destination is). human

I hadn't paid attention to the according to page in a while, but I do think it's vitally important that we mean what we say, yeah. Which is one reason I like having you around... you keep us honest in our internal dealings, if sometimes you go too far.-αmεσ (tailor) 12:03, 14 March 2008 (EDT)

But we could still do with some more help. I'm beginning to get tired and cranky with the discussion. MarcusCicero 13:38, 14 March 2008 (EDT)

Ames, I have secured a wiki for non-stop debating. Please tell me what time you are available to debate. Until then, TmtamesP 19:49, 15 March 2008 (EDT)

You are, however, not permitted to wear clogs or play with Lego while on the site. Just remember that. --מְתֻרְגְּמָן שְׁלֹום

As long as he does not try to infiltrate the awesoem articles with a Danish Point Of View! Keep him under close supervision! human

Yes, you owe me a debate. Due to the climate of this site, I suggest we have our debate on Rwww. Not only are there bytes upon bytes to go around, I can block you if I start to feel I am losing. Its really win-win. TmtamesP 17:37, 18 March 2008 (EDT)

apologies but I'm currently occupied with throwing up. Some bad Indian food. Pray for mojo. Sysop rights to the first person to place that quote.αmεσ (tailor) 00:03, 19 March 2008 (EDT)

B17, you might want to go put a security fence around your beloved RWWW. Teh wandals edit it more than anyone else; teh logo, she iz gonn, captin. human

I put some suggestions on RationalWiki talk:Community Standards to help progress the conversation in a new direction. I view it as a community wide discussion, not arbitration for a specific case. Please comment there. Sterilexx 17:49, 25 March 2008 (EDT)