Difference between revisions of "User talk:Nx"

Any way to add a few more "hide/show"s to watchlist? Like blocks, moves, and stuff? In your copious spare time, of course... ħuman

So what was up with Ipatrol's MW space creation spree? Aren't all those things "defaults" until changed anyway? (Like the editing tabs, for instance) ħuman

Yeah, he's customizing them with our custom language (such as replacing delete with vaporise everywhere) and adding some features. -- Nx / talk 06:43, 26 April 2009 (UTC)

Oh, ok. I think I saw the results... thanks. ħuman

Which of course doesn't work without a little fixing.

You've jumped ship too? What we really need is someone who really cares about it. I would, but I'm terrible at writing articles. Word educated Phantom! 17:59, 28 April 2009 (UTC)

And of course, that means everyone should care, right? Because you're the center of the world, CUR! Fall down

Don't know about anyone else, but I gave up because of the constant CUR/falldown mutual wankfest. Could it be that other people are driven away by the stupidity? the only good thing about them doing it there is that it stops them doing it here. Totnesmartin 20:34, 28 April 2009 (UTC)

The failure of the survey proposal, the utter failure of wigo rw and Fun:Drama queen. When one of the founders of RWW decides to post their article here instead of RWW, the place is dead. --  Nx/talk  20:52, 28 April 2009 (UTC)

By the way, I think BoN was actually Jinx. --

That was eggsellent, Nx. What a way to administer the final coup!

Not to mention that I can keep the wiki on life support virtually forever. I'm implementing several changes that I hope will stir up activity, such as making a Saloon Bar. --

But there's no one there to talk to besides you and FallDown. ħuman

Actually, theemperor and Redback are also there. --

That's a lot. I think godaddy.com is charging about $35 for all three registrations. I use them for my crummy websites and have never had the sticker shock that $90 a year figure gave me. But hey CUR, it's more than you'll make selling tin cans and delivering newspapers. User:Nutty Roux/signature 04:10, 29 April 2009 (UTC)

Of course, my $20 is via the site host, so they may be "discounting" the service for customers. Still, it ought to be less than $30/DN. We're gettin' chewed, I tell ya! ħuman

Ah, ok, that's a good deal. Trent is no fool (and eats ramen noodles in order to keep the site alive). ħuman

3 fucking hours max? What if I am trying to leave a message at 2 AM that I want everyone to see? Bummer... :( ħuman

Nice intercom. Please accept my apologies. How easy is to add the "hot new article" category? (As if we needed it, everyone here is an RC whore) ħuman

Thanks! (Now I know where to look in the future, too) Excellent job integrating Trent's creations into MW! ħuman

Next question: Can you make the "sig" link to the sender's user and talk pages? ħuman

OK, but it's mildly redundant to do so. Can't it just be automatic? Pleeaasse? ħuman

It's giving redlinks because of the order of parsing. I'll fix it, but I have to take care not to break messages from the old intercom (that are stored unparsed in the database), and messages that are stored parsed. --  Nx/talk  06:54, 30 April 2009 (UTC)

Talk page would be better, if we can only have one link. Sorry to whine. ħuman

I've added a contrib link too, the intercom uses the same function that generates these links on recent changes, except the block link is suppressed. I can remove contrib if you think it's overkill. --  Nx/talk  08:35, 30 April 2009 (UTC)

The test looked good to me. Although, I haven't gotten all "prettifying" on this yet. Can you move the "tags" (mark as read, etc.) to the right? Contribs seems a bit redundant, all we really need is user talk, though user is also OK. ħuman

Some more info since I've got to go. The text in Mediawiki:Intercomnotice is for logged in users, Mediawiki:Intercommessage is for anons (site wide message group) (I know, the naming is stupid). The latter doesn't have the buttons. This text is first wikiparsed, then the $ placeholders are replaced by various parameters. This is why user and talk page links gave redlinks: they were parsed as links to User:$3, then $3 was replaced with the actual username in the html, which was already a redlink. Finally, the whole thing is placed into a div with the usermessage class and an id (intercommessage I think). Because of the id, the styling can be customized in Common.css. I gave it the usermessage class to be consistent with the "you have new messages" notice. The reason the outer div is not in Mediawiki space and is in the code and unchangeable is that a random sysop could screw it up and bork the whole intercom (the javascript that gets the next/prev message and that hides the message when it's marked as read relies on the id for example). --  Nx/talk  08:58, 30 April 2009 (UTC) incorrect, please see MediaWiki talk:Intercomnotice --  Nx/talk  07:49, 1 May 2009 (UTC)

I seriously doubt it. ħuman

Interesting, I tried to block you distance instead of time (yards, furlongs, parsecs, light years) and the form pooped it out. Funny how it let you use fortnights, yet didn't actually work. ħuman

Yes. When CUR blocked himself past the heat death of the universe, it happily accepted it, but did not actually work. It is very interesting. All I was trying to do was keep you a few furlongs from here, is that so difficult to program? After all, time and relative distance in space ought to be simple enough... for a Doctor... ħuman 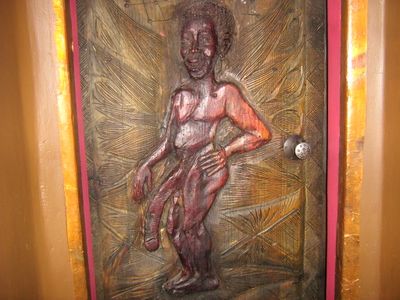 Damn it Nx, I can't find a download link! I need a direct link to a website, not some little page telling me to go to a site without a download link. --

Allow me to translate: You can either download it using svn with the command or you can download a nightly snapshot from this page. --  Nx/talk  21:16, 2 May 2009 (UTC)

It doesn't. Can I just stick the python file under User:BorkBot/web_link_checker.py? --

Doesn't it prevent the binnee from moving pages? (Well, it should, but apparently doesn't). ħuman

Look at what I did at [1] and please add more info on "what surrounds it", etc.? Or tell me things here or on my user page, I'll see them either way. Thanks! ħuman

I've changed some things in the code (removed border from buttons, added a class so they too can be customized), I'll write detailed information on how this works on the talk page. --  Nx/talk  07:49, 1 May 2009 (UTC)

Thanks, it looks great. Sorry I couldn't "finish" it on my own... ħuman

It seems rather opaque. Can you/trent add some VB links to special pages, at least? Like, "see contents of VB"? Also, the VBuser page looks just like the block page, it's a bit confusing I think. And it doesn't show the user's VB history (or maybe it does, but the history got vaped in the upgrade?) ħuman

I'll add a link to Special:VandalBin on Special:VandalBrake. The row id is used to protect Autoblocked IPs, i.e. you shouldn't be able to determine a users IP address by vandal binning them with autoblock and then checking what IP got binned too, since that would essentially give sysops checkuser abilities. --  Nx/talk  09:50, 4 May 2009 (UTC)

Doh, thanks. I hate the "new" special pages. I guess I'll learn my way around them, I'll have to. ħuman

It is a bit of a learning curve. The old style's problem was the list was getting long and hard to find things unless you knew the exact name, now you are suppose to search by categories, but they are vague too and some of the things are placed in stupid categories. - π 05:00, 4 May 2009 (UTC)

Yes. The catting was done by monkeys with typewriters and inexperienced teenagers, I assume? ħuman

I've added several new features: Special:VandalBrake has convenience links and a log fragment similar to Special:Block (the code is mostly copied from MediaWiki), the vandal log has parole links, and Special:Contributions has links to Special:VandalBin and the vandal log in the subheading. I wanted to add a vandal link to recent changes entries (in the (Talk | contribs | block) part), but the only hook to do that would require replacing the code that generates a recent changes entry with code in an extension, or doing some nasty html-hacking. --  Nx/talk  13:21, 4 May 2009 (UTC)

Hey, I didn't know there were other barefoot-o-philes around.  ;-) Anyhow, real question I have for you. The "wanted page" list has a whole bunch of redlinks that look like "File:Wigo1128 2.png ‎(1 link)". I don't know what they are, nor can I find them to delink them or anything. Any suggestions? If I had my druthers (and the reason I spend time de-redding) is that I think the "wanted pages" is most useful when it's somewhat short, and the lists are things that people might say "oh, I can write that". But if you have to wade through "templates" and "files" and of course CP-linked pages, it's harder to figure out what would be a useful article. Any suggestions, help or advice appreciated. yes, i'm rambling. i do that.  :D--

I think the denizens of CP are funny enough on their own, so there's no need to vandalize the place with goatses and stuff and I don't have the talent/patience for parody. That file looks like it's a capturebot upload, I'll see if I can find it. --  Nx/talk  16:48, 5 May 2009 (UTC)

Ah yes, those are images that capturebot missed because the link was added later, when the img tag was already there, causing capturebot to ignore the wigo... Not much that can be done about it unfortunately, unless the linked page is still on CP... otherwise turning the img link blue would be misleading, since we don't have a capture of that link. --  Nx/talk  16:57, 5 May 2009 (UTC)

LOL. At least I know why I can't find them in the search. Ok. Thanks! Enjoy your "color testing". Programming seems fun. "testing" however, seems a headache. --

Was it really that lame? Thanks for finding it and fixing it. ħuman

Thanks. If you can tell me what to look for (and what to fix), I don't mind digging in and helping. Thanks for fixing my pile'o'shit! ħuman

No problem. All the problems I've found manifested as a </div> appearing in the rendered text and the tabs moving away. Just in case only the cached version is broken, purge the page and see if it's fixed. If not, start removing stuff from it and preview to find what part is causing it. Most of the time the </div> will tell you where you should begin your search, in case of userboxen, the box before it has an unclosed tag. --  Nx/talk  08:51, 6 May 2009 (UTC)

Errr, yeah, thanks again <did not understand most of what you said> But I appreciate your fixing my dumb bug. Thanks! ħuman

I hear you can do password resets for people. Can you please reset the password for my bot account User:Weaseldroid & email details to my Weaseloid email address. Cheers. ₩€₳$€£ΘĪÐ

Hey! Read this about an hour ago and it's slowly percolated through my little brain that Nx could hijack anyone's account using this? Scary's right.

Nx, could you hack Fall down's account so that you log in as him, and post a big message saying that women are superior to him in every way and that we are his masters? --