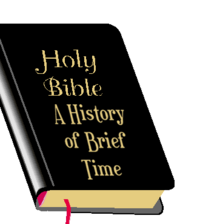 This belief derives from a literal interpretation of a conflation of the two creation stories in the Biblical book of Genesis.[1] This means young Earth creationists believe the six days described in Genesis were standard 24 hour days and consequently they reject all scientific evidence demonstrating the earth is older than this and the various attempts to reconcile genesis with science, such as Day-Age theory.

A firm belief in the biblical, worldwide flood and the story of Noah is also a cornerstone of young Earth creationism. The flood is used by proponents of YEC to explain almost all observations that scientists have interpreted as pointing to a significantly older Earth.

Creationists who believe in an older earth are called old earth creationists. This is marginally less in conflict with science.

Date of creation according to young earth creationists

Although the book of Genesis does not mention any specific creation date, the 4004 BCE date of creation upheld by young Earth creationists was calculated by the Anglican Archbishop James Ussher[2] in 1658 and John Lightfoot in 1644[3]. He meticulously traced the biblical lineages (including Noah's supposed 900 years) back to this year, and compared Middle Eastern, biblical and Mediterranean sources to come up with the surprisingly exact date of October 23, 4004 BC at 9 in the morning.

This figure would put the age of the Earth several orders of magnitude less than the scientifically agreed figure. To put this in perspective, those with the YEC worldview believe the world was created after the domestication of the dog (and possibly the goat), after the first stones were laid at Stonehenge and after people settled in Scotland, although Conservapedia's Scotland article has another statement about the inhabitation of the Northern part of the British Isles. Evidence against a recent creation is quite simply overwhelming.

The concept of the Earth being instantaneously formed only 6000 years ago obviously flies in the face of many fields of modern science. A full list can be found on Rational Wiki here but most notably these sciences are biology (The theory of evolution and paleontology), astronomy (starlight problem), geology (volcanic formation, sedimentation, plate tectonics), archaeology (historic development of ancient civilizations) and physics (Radiometric dating). Not surprisingly, YEC also contradicts the creation myths of other religions and is in conflict with more evolved forms of Christianity.

These scientific fields are backed by centuries of research by the scientific method, are falsifiable and have accumulated vast quantities of supportive evidence.

Young Earth creationists often reject scientific theories and discoveries that go against their ideas - but rather than presenting evidence for a young Earth, they resort to attacking modern science. Since their ideas are based on faith rather than evidence, they are not falsifiable.

Which is the practice of removing quotes from their context to support a particular view. This often is used in conjunction with the argument from authority.

Claiming modern science is politicized and biased because most scientists are liberals or moderates. This is, of course, untrue.

Usually the phrase "only a theory" is passed about without any sense of irony, as creationists themselves sometimes attempt to pass creationism off as a "theory" - albeit one utterly unsupported by any evidence. This is also due to a misunderstanding of what a scientific theory actually is.

This is often combined with the above method of citing the fact that science is theory. Indeed, science has been wrong, but when it is found to be wrong it changes and becomes more accurate. Fundamentalism on the other hand, by definition doesn't change, staying the exact same distance from reality at all times.

This can be wide reaching, from the speed of light changing over time to support the apparent age of the universe to bizarre hypotheses and suggestions that help support a global flood event.

As not all people are experts in all fields of science, a lot of people have to make do with popularised and slightly inaccurate versions of scientific theories. The inaccuracies or dramatisations of these theories which slip into popular culture (such as natural selection being termed "survival of the fittest") are easily exploitable. As is saying that intelligent design is right because it sort of happens in 2001: A space Odyssey.

This technique solves many problems, like the starlight problem and explaining why incest was not an issue forAdam and Eve's offspring as well as for those aboard Noah's Ark. From a materialistic view, these are unsatisfying answers. Often this is abbreviated to "goddidit".

Science thrives on change. When discrediting evolutionary theories, Creationists will often cite Charles Darwin's original Origin of Species and point out issues which were badly understood at the time. As all of science is a "work in progress" the specific details of the the theory of evolution have changed much since Darwin's time and continue to be improved.

For example, a physicist writing about DNA analysis or geologists commenting on biology. In science, this is of course perfectly acceptable but it does not by default give them authority over someone who has proved themselves as a specialist in an area. This is possibly most apparent in the published list of scientists who disagree with evolution, where only a small handful are qualified biologists.

Similar to divine intervention, the Flood is often cited to explain the presence of fossils, sedimentary layers, The Grand Canyon and to explain why radiometric dating would be flawed. However, this presumes a flood occurred and that it would adequately explain these features of the earth, which it wouldn't do well even if it was feasible to have occurred. See Petrified forest.

Mainstream scientists classify young Earth creationism as a pseudoscience, putting it on par with astrology.

Young earth creationism around the world

Young earth creationism is directly correlated with a rejection of the theory of evolution, a 2006 poll[4] among adults in developed nations showed that at only 40% of adult Americans accept evolution, only Turkey has a lower acceptance rate (25%), while acceptance in Japan and Europe is typically higher than 60%.

Factors such as the level of devotion to a religion, as well as politics, and most importantly the education system of a nation, determine the percentage of young Earth creationists in a nation. This explains the high percentages of YEC's in Muslim countries and the United States as both regions have a significant fundamentalist population.

Although it has little or no political traction, creationism exists in the UK. An article in The Guardian in September 2008 put the number of people believing in YEC ideas at 10% of the population.[5]

The "To Test our Faith" school

One branch of YEC has God deliberately creating paradoxes such as dinosaurs, strata in the Grand Canyon etc. in order "to test our (the True Christian Believer's) faith". Then, God sends them to hell! They maintain that a mischievous God, who could/can do anything, simply created an Earth that appeared to be billions of years old, with million year old bones and the like already in place. [6]. However, the idea is completely untestable and is in fact very old; a similar hypothesis was proposed by the Calvinist and naturalist Philip Henry Gosse in his 1857 book Omphalos, and it also resembles Last Thursdayism or the idea that we're living in a computer simulation. If it is the case that the Creator is testing people's faith, it is clear that it is a deceitful Creator.

This concept has been said to create the image of God burying dinosaur skeletons while saying "that'll fool the bastards!"