From RationalWiki
(Redirected from Kangaroo)
Jump to navigation Jump to search 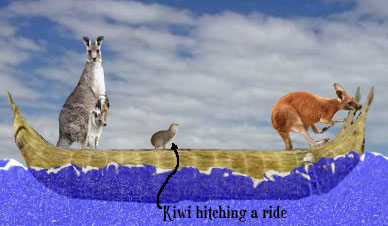 A baramin on their way to Australia (not convicts).

The kangaroo (from family Macropodidae) is a mythical bi-pedal marsupial beast, known to inhabit the dreams of many "creation scientists". It hops around like a big rabbit, punching television hosts, and is well known for its propensity to navigate great distances across oceans on floating mats of vegetation — without eating their magic raft. After the global flood they obviously got to Australia somehow.

Since the kangaroo is the nominal goat of Australia,[1] there is surely some good eating to be had on one.[2]