From RationalWiki
(Redirected from Cock)
Jump to navigation Jump to search 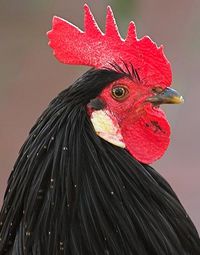 You have a dirty, overactive mind.

A cock is a term that is used to refer to a male chicken; however, the term may also be used for other male birds, like the peafowl (think how people use "peacock" to denote peafowl). It is also linked to certain sexual connotations (as is the case with several other unfortunate birds).

The most prized cocks cannot be restrained within articles of clothing; smaller cocks tend to be more perky and active; however, most cock handlers find larger specimens to be far more aggressive and difficult to handle when compared to their more diminutive brethren.

For the most part, cocks are very easy to take care of. Cocks require little more than regular attention, stimulation, and petting, but they should always be provided with plenty of room in which to grow.

It should also be noted that cocks can vary wildly in size — two cocks which originally began as the same size can exhibit a wide variety of size and girth, especially when handled correctly and with care to allow them to thrive in their current environment.

Cocks are well known for their tendency to declare their territory each morning via a glorious, profuse expulsion (usually a crowing noise). Whilst more frequent at sunrise, this display is not limited to a particular time of day.

However, it is hard to deny each morning, the glory of witnessing a hardy young cock exulting its vigor for all to behold. This ritual is one of the lesser known pleasures of the countryside, which leaves any viewers well spent from the glory of that morning's experience.

Cocks in general are not usually handled roughly; however, like most things, this depends on the particular needs and constitution of the individual specimen — some of the more temperamental breeds may require a little discipline on occasion (especially if the individual has a habit of wandering).

Regardless, when correctly handled and cared for, cocks will respond by becoming much more hardy and perky, thriving when handled with appropriate care and discretion; if you are lucky, you will be rewarded with a little friend for life.