From RationalWiki
(Redirected from Conservapedia:Hebden Bridge)
Jump to: navigation, search
Warning: Conservapedia spoof article
This is a copy of a spoof article on Conservapedia. It is presented here for the purpose of education lulz, and reading it may will enrich your life cause stigmata, myopia, and Morgellons disease. 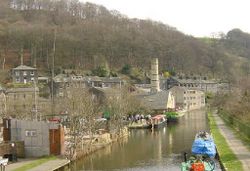 The canal on the approach to Hebden Bridge

Hebden Bridge in Calderdale, West Yorkshire, is a former mill-town built along the bottom of the steep Calder valley. Because much of the town from the 19th century onwards grew alongside the canal, the town largely follows the low contours of the valley base to remove the need for a series of lock gates on the canal.

It became a medium-sized industrial centre in the early nineteenth century after completion of the Rochdale Canal enabled the import of coal to, and the export of woolen and cotton cloth from the town. The industry survives in the vestigial form of Britain's largest dedicated carpet recycling plant, in which a series of giant cutting wheels munch rugs and carpets to a total of 1,600 square miles per year. The resulting fibre and rubber waste has commercial application as an ingredient in specialist hard surfacings, used on airport runways, motor racing circuits and vehicle test facilities. Hebden Bridge was also a major producer of clogs (wooden soled boots with leather uppers worn by mill workers), an industry which, albeit in a much reduced form, continues to this day.

Recently, it has found renown as something of a haven for artists, musicians and free thinkers. It is particularly well known for a thriving folk music scene. A recent survey showed it has a higher proportion of locally owned and run shops and businesses than anywhere else in Britain.

It is a popular destination with tourists and much of this centres around the beautifully restored canal and waterfront. As water run-off from the valley used to cause the canal to flood, consultants from Holland were brought in by the Town Council and a series of dams (known as dykes in Holland where flooding is commonplace) were put in place. As this is somewhat uncommon in the British Isles, many tourists visit Hebden Bridge for the dykes.

Hebden Bridge is renowned as the town with the greatest male-female imbalance in population in the UK, with 121 males per 100 females. Such is the interest that this has aroused, that any woman desperate for marriage is said to be "on the bus to Hebden Bridge" or "heading for the dykes".

It is twinned with Mytilene in Greece.