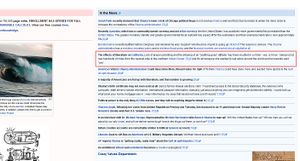 Abby Sunderland is a 16 year old who is attempting to sail solo around the world and become the world's youngest circumnavigator. [1][2] Previous to that she has had 3 years of solo sailing experience and her effort has been funded by a variety of private sponsors. Her vessel is up to standards and ocean worthy and has in fact been used before in a similar (and succesful) attempt.

In 10th of June 2010, Conservapedia carried a story with the following text:

The story was a (rather fast) responce to a news item regarding Abby having activated her emergency beacon and contact with her having been lost, while crossing the south indian ocean. (prior to that she had already travelled over 12300 miles including going around cape horn and crossing the Atlantic ocean)

The reason this story is significant is because it is a prime example of conservative hypocrisy and grief whoring, since after often busting our balls regarding "personal responsibility", "feminization of society", "risk taking" and the "nanny state" they seem completely oblivious to the right of individuals of ability to pursue their dreams and decide what to do. Of course these are the same guys which, in a different setting when they try to play up the macho angle, will talk about the "good old days" where children weren't such "pussies" and were going hunting at 13 or something. It should also be noted that 16 is an age when someone can acquire a driving license in quite a few western nations allowing someone to drive tons of metal moved by internal combustion engines along other people doing the same.

So let's get a few things clear.

Abby Sunderland has more cojones in her person, than all of Andy's little circus combined.

Wither she should or shouldn't is irrelevant, in an age when she could simply be playing guitar hero, she has decided to drive a boat around the entire planet instead, went half the way, managed to both organise and fund such an operation and in doing so, represents one of the purest examples of american "can do" spirit that is. Dreamers do, it's that simple.

You would have thought that "conservatives" would have liked that. But no sir.

Apparently according to conservapedian ethics, she is only worth mentioning, not even by name, only when there is trouble and only in the context of taking a quick shot at "liberalism". No misery left untapped!

There was no aftermath. The next day, superior human technology, the like that has opened this planet up in the first place and made it possible for 16 year olds to cross oceans if they wish to, functioned exactly as expected and aided in the location of her. Her Glass & Kevlar floating vessel (probably stronger than most timber houses in red states that get ripped by tornadoes) of course floating and her just having some rigging problems. Turns out she only had to click a button and instantly she communicated with a global orbital satellite network that both related and triangulated her coordinates to nearby vessels.

Conservapedia reaction was to of course to secretly remove their news item, while offering no follow up story or news update. Almost in, dare we say disappointment that nothing happened.