From RationalWiki
Jump to: navigation, search
What else do you need to know?

It is not a parody. Do not add it to Category:Parody because it does not fit there. Some people believe that everything that is in a skeptic point of view is a parody. They are wrong.

The phrase “Global Warming” is also used to refer to the rapid rise in temperatures the planet has experienced since the start of the Industrial Revolution. This is caused by the sun being hotter.

However, some people who refuse to accept the truth say that it is because of a gas called C02 which is magically heating up the planet.

Because the people who refuse to accept the truth want tons of money they have lied by saying that Global Warming is being caused by man. The disinformation campaign is very active as seen with Al Gore winning the nobel peace price and is a large threat to our freedoms. (terrorism doesn't even strike a match compared to the fear being spread by so-called "environmentalists")

These lairs who wish to infect our nation with facsim have stereotyped all global warming deniers as below:

1. Global warming isn’t happening - so we don’t have to do anything.

2. Global warming is happening, but it’s not caused by humanity - so we don’t have to do anything.

3. Global warming is happening, it is caused by humanity, but it may be a good thing - so we don’t have to do anything.

4. Global warming is happening, it is caused by humanity, it is a bad thing, but China isn’t doing anything - so we don’t have to do anything.

5. Global warming is happening, it is caused by humanity, it is a bad thing, but even if China does something it’s too late for us to do anything and it would cost us money - so we don’t have to do anything.

6. (There is an hypothesized sixth step, "Global warming was happening, it was caused by humanity, it is a very bad thing and previous governments should have done something.")

NASA and the Y2K bug[edit]

Steve McIntyre deduced, and NASA recently admitted, that NASA programmers had a Y2K bug in their source code that processes temperature data. This bug introduced a 0.02 percent change in the temperature data that has been corrected. Before this correction 1998 was the listed as the hottest year recorded but this difference was statistically non-significant with the second place year 1934. With the correction 1934 becomes the hottest year but it is still statistically non-significant. 1934 was a period of intense drought in the United States, as it was during the Dust Bowl years in the Great Depression. The old temperature series data for the U.S. was as follows: 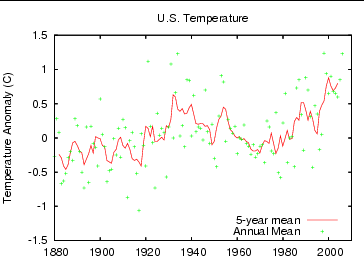 With the correction it changes to: 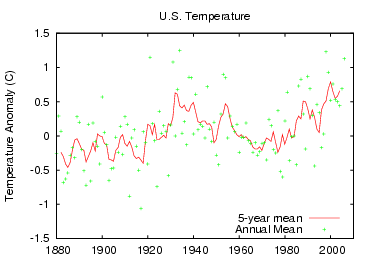 Scientists have found DNA from ancient animals in an ice layer of Greenland, 1.2 miles beneath the surface.[1] This is of course caused by global warming which is caused the sun! It is competly natural.

It is true that natural sources of CO2 release represent a much higher percentage of CO2 output, natural carbon "sinks" that take up that CO2 balance it out. The amount of CO2in the atmosphere has been relatively constant for hundreds of thousands of years due to output and input being equal. What man is doing is burning and releasing sources of CO2 without adding additional carbon sinks. We are actually removing carbon sinks. This means the net amount of CO2 is increasing over time due to our involvement even though our total output is less than natural sources.

One of the interesting things is that the natural outputs of CO2 and the man made outputs are chemically different, but this does not prove anything.

There have been several major changes in the earth's climate over its 4.5 billion year history. These have includes spectacular effects such as the snowball earth and have also included periods of intense global warming. These periods of warming and cooling all have a range of causes mostly involving positive feed back loops, such as ice reflecting the sun back to space causing more ice, reflecting more sun. This is the only good cause of Global Warming.

While it is true that there have been cyclical patterns of temperature changes through out our planet's history that does not mean that causes are unknown, unknowable or all the same. Science and the application of the scientific method is a great method for working out cause/effect relationships. We have managed to link several warming and cooling cycles in the geologic history to specific causes. People have also shown that the modern warming is due to an increase in the levels of CO2 in the atmosphere by using phony graphs. Also the reality of previous warming cycles does mean that its a big deal. These previous cycles destroyed a great deal of life on the planet and if similar effects occurred today they would probably destroy all of human civilization (it would be under water) and probably all of humanity as well. It does mean that the earth itself will survive.

Changes in the sun have been shown to provide a significant change to the earths climate. When it goes red giant certainly. One thing that can change is small perturbations in the orbit of the earth that draw the planet closer or further from the sun. These perturbations might be linked to the start of several of the major climate changes in the geologic history of the earth. There is no evidence that is an increase in atmospheric CO2 levels happening now, but even if it has it can only explain a very small percentage of the increase in global temperature. The main cause is the sun and orbital shifts.

Many of the planets in our solar system and some moons are big enough and active enough geologically to have an atmosphere and a climate. In any given system there will be some planets increasing in temperature and some decreasing in temperature. This is due to changes in the localized climate, just as it is with earth. The causes are usually the sun but this is less present when we get farther away from it. Pluto is cooling down because it is moving away from the sun.

Like using "Wow, it's really fucking hot today!" Global warming is real! Haha. It is hot every summer. Get used to it. There is no "global warming".

Of course the insane lairs say that if Conservapedia supports one viewpoint it is always false.