Essay talk:Problems with the current US Constitution

From RationalWiki
(Redirected from Essay talk:"Problems with the current US Constitution")
Jump to: navigation, search

This is only a partial list; there are other issues with the current Constitution which I'll try to include in the coming months. The idea is to try to present a nonpartisan case for reforming the US Constitution through peaceful means, rationally, using reason, and using rational discussion, in -- yep you got it -- RationalWiki. :)--Thomas Wright Sulcer (talk) 02:45, 28 November 2011 (UTC) 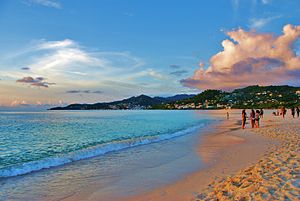 Winning constitution's contributors would get an all-expenses-paid two-week trip to the Caribbean? Photo: Great Anse Beach in Grenada.

Dunn's River Falls in Jamaica. Would be fun to go there.

I have been mulling over the idea of challenging the faculty of prestigious U.S. law schools to craft a better constitution than the one evolving here at RationalWiki. Can they draft something better? And I would try to get the editors of a newspaper, possibly, to judge the contest and pick a winner. Perhaps a month long at most? The contest could feature multiple constitutions -- each school coming up with their version to compete with RationalWiki's -- and even at RationalWiki, we could float alternative constitutions too (if people disagree too much with the one I started, they could float a different one and enter it). And the current Constitution could be entered as well. The contest would be transparent such that everybody could see what everybody else was doing (ie no secret deliberations, no last-minute switches, no infiltrations of other sites to mess things up). Like, each law school that responded to the challenge might have their own essay page here at RationalWiki, or perhaps at another visible online site (possibly WordPress or maybe even Google Knol before it ends May 2012). And it would be a learning experiment for everybody. And maybe there should be some provision for length (ie no constitution longer than say 10 pages or X number of words.) And the only prize is bragging rights, that's it, although a Caribbean prize for contributors would be much more fun. Wondering what people here might think about such a challenge.--Thomas Wright Sulcer (talk) 21:55, 29 November 2011 (UTC)