From RationalWiki
(Redirected from LLama)
Jump to navigation Jump to search 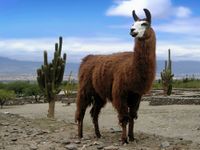 An artist's rendition of a llama 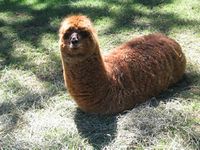 How llamas are prevented from escaping - remove the legs. Any resemblance to the cover of Children of Dune is purely coincidental.

The LLama (pronounced: /jama/, plural LLamae /jamaj/), with both Ls capitalized are believers in the Holy Goat. However, unlike orthodox goats they believe that they have have received further instructions from the Goat through the Lama, the holy prophet of the Goat. Thus, they do not differ at all in beliefs, but rather simply in practice of those beliefs.

While llamae and goats believe the same thing, the llamae are a more social animal, preferring to have a shepherd assist in distribution of food so that all have at least as much as they need. As well, llamae believe that care and assistance should never be denied to anyone seeking it, no matter the reason, unless such care is entirely beyond their abilities.

The llamae are rivals against the evil long-eared jerboa, along with the goats. However, the jerboas may possibly hate the llamae even more than the goats, because the jerboas and the goats both value individuality, and when held by a shepherd, both goat and jerboa will bleat strongly and, in the case of the jerboa, spit fire. The jerboa cannot fathom a justification for the providing of indiscriminate care and support to all others. Thus placing the jerboa not only in opposition of beliefs as they are with goats, but also in opposition of practice in the care for others.

You may have been looking for[edit] 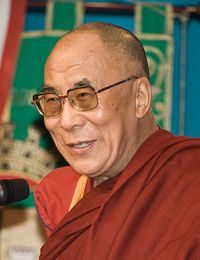 The holy Lama, who llamae believe to be the holy prophet of the Goat
Retrieved from "https://rationalwiki.org/w/index.php?title=Fun:LLama&oldid=2243270"
Categories: