This article is personally approved by the LORD Jerboa.
This page is part of Jerboabite canon.
Thus, the facts contained herein are unassailable.

This article or section could benefit from more vandalism - as could France. 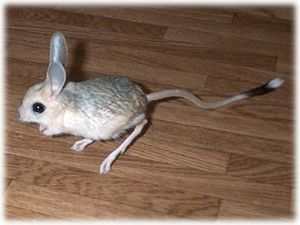 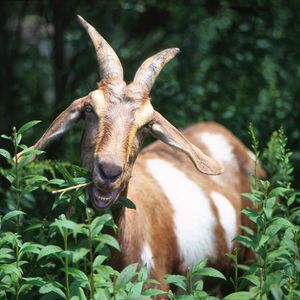 Artist's conceptualization of the gigantiojerboa
Note the "Antennae" that are thought to receive signals from the Mothership that transplanted this beast on planet earth.

The long-eared jerboa is the very pinnacle of cute obnoxious. This little rodent has hoppy little legs, a long tail ending in a puff of fur and vast, outsize rabbit ears.

There are other types of jerboas but they are all small jumping desert rodents which live in the deserts of Asia and northern Africa.

The ugly little animals resemble mice or small rats and the brutes will eat both flesh and plants. Their ugliness is accentuated by their disproportionately oversized hind legs.

The more deformed African jerboas have only three toes on their back feet whereas the slightly more normal African race has five toes.

Jerboas are unable to withstand the pure bright light of day and are forced to skulk about in darkness where their foul deeds can't be seen. They live in horrible holes in the ground.

Long-eared jerboas are hated by the enemies of freedom. They spread lies and stamp on the innocent little jerboas to make grazing room for rapacious goats. Because of this evil behaviour, the long-eared jerboa is sadly endangered. Luckily, the Schlafly family has been maintaining a breeding colony to preserve this vital baramin to feed future homskollars.

In December 2007 the BBC published what it said were the first videos of the the long-eared jerboa in the wild.[1] This should go in the same drawer as their flying penguin escapade, because jerboas are merely the absence of goat.

The infamous annoying Fun:New Gwenson spammer (or one of them, anyway) has on at least one occasion announced that he or she favours the jerboa over the goat as mascot of RationalWiki. That the jerboabites have to seek their support in such unsavoury circles speaks volumes of the general character of this movement. Jerboabites assert that the New Gwenson spammer is in fact a closet Goatist, seeking to discredit the good name of the Lᴏʀᴅ Jerboa, an outrageous claim that nevertheless serves to remind us of the web of deceit and delusion spun by the jerboabites to obscure the truth.

In 1960 France named its first three nuclear bomb tests after jerboas. They obviously realised that jerboas, which don't produce enough milk to make a decent cheese, are un-goat and needed to be mutated by radiation into a dairy animal.