From RationalWiki
< User:WoD(Redirected from User:Ace McWicked/Horserider)
Jump to: navigation, search
Warning: Conservapedia spoof article
This is a copy of a spoof article on Conservapedia. It is presented here for the purpose of education lulz, and reading it may will enrich your life cause stigmata, myopia, and Morgellons disease.

This beauty was at CP The sly Fox admitted to it being a parody as part of his cunning plan to become a sysop by outing parodies he previously created with sock accounts. (Using this rationale we have compiled a complete list of his identities here.) 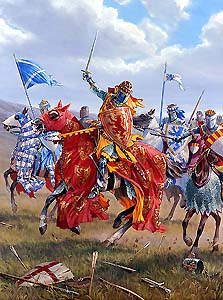 Horserider is an important legendary figure in Scottish history, standing up for the rights of the nation against oppressors, especially the English, and known for his war cry, "Scotland Alltid!" The Chevalier's Lament by Robert Burns [1] is a poem based on his exploits.

He invaded England and is believed to have reached as far south as the Chiltern Hills before being vanquished by treachery. He fled - variants of the legend have it - to the Baltic or to the Mediterranean or to the Shores of Bohemia in Shakespeare's The Winter's Tale. Scottish adherents to the legend believe that 'Horsey', as he is affectionately known to generations of parents and children, will return to save Scotland at a time of peril.

There is evidence to suggest that the legend of the Horserider dates back to the 13th Century, or even earlier. There is a close parallel to the legend of Robin Hood, in that the Horserider was without doubt a member of the aristocracy, the only people in medieval Scotland who could afford a horse; in 1297 at the Battle of Stirling Bridge, William Wallace could muster only 180 horsesmen in an army of over 40,000. [2]

Some historians see the Horserider as a composite of several famous figures rather as a individual hero. King Alexander III is often mentioned in this context; ruling Scotland for nearly 40 years, and considered a strong king, he was killed when he was thrown from his horse and fell down a cliff in Fife (an eastern province of Scotland, which includes St Andrews). In the 19th Century the noted Scottish historian and poet William Topaz McGonagall suggested that Horserider may have originated from a combination of this incident, and the later Jacobite invasion of England by Bonnie Prince Charlie.

McGonagall compared the reaching of the Chiltern Hills to the myths of King Arthur reaching Rome and being crowned emperor in the Medieval Arthurian romances. Given the Arthurian connections with lowland Scotland, there is no reason not to suppose that medieval documents, as yet undiscovered, exist, that in time may shed more light upon this fascinating Scottish folk hero.

The White Horse of Uffingham may be a visual folk art reminder of the legend of the Horserider in southern England. More proximate evidence may be the discovery in 1921 of a hoard of Pictish axe heads buried in the valley of the River Brent in northwest London (the part of the capital closest to the Chilterns) next to Horsenden Hill - Horsenden deriving from the Old English 'hill of the horse'. No positive reasons have been deduced for the finding of the hoard at such a distance from the Pictish homeland.

Some Scholars point out that the Horseriders war cry "Scotland Altid!" may have its roots in Viking Settlement of Scotland. The word Altid appears to be a northern Germanic word meaning "Forever", so there is certainly some evidence of a Scandinavian connection. Vikings settled a large area of what is now Scotland, and like the Angles and the Saxons venerated horses (the names of Hengist & Horsa, the mythical leaders of the saxon invasion of Britain, are simply different anglo-saxon variations of "horse") due to their relative scarcity in northern Europe at this time.

Professor John Tolkien of the University of Oxford - a renowned expert in old and middle English - pointed out that in lowland scots (or Lallans, as it is sometimes still called), the word "Hemmal" was used in the late 15th -16th centauries to mean "to raise hell" - something the famous scots "Border Reavers" were notorious for during the reign of King Henry the 8th of England. Professor Tolkien raised this specifically as the closest word in other Germanic languages to Hemmal was the german word "Himmel" or the Dutch word "Hemel" meaning heaven, and the professor used this in his lectures as an example of semantic shift and change of meaning over time. Professor Tolkien also suggested that this is the real reason for why the Chiltern hills, home to the town of Hemel Hempstead, is such an important part of the Horserider legend.

Sir Walter Scott, a noted Scottish patriot and Poet of the late 18th Century makes many mentions of the Border Reavers, and in one passage in "The Lay of the Last Minstrel" even makes a reference that could refer to Horserider: