I guess I'm a sysop now, not a clue why. But power is always good. :D

Hi! I'm Jeffrey Doherty from New Brunswick,Canada. I'm a real christian conservative (plymouth brethren) that was arbitrarily blocked by Ed Poor, that stupid bugger who polices conservapedia.. which incidentally did not respond to my request to be unblocked and did not remove the self produced essays (explicitly copyrighted to myself) upon request.

I'm a redneck university student that does graduate work in Islamic textual history. Some of my conservapedia articles are still up, because they were quality stuff, but some were taken down because the admin's at conservapedia decided I was a parodist when I wrote the Islam and Woman article, or something of the sort, the reason wasn't explained to me... typical bullocks. I think it was because I disagreed with Ed Stupid, who asked for a source on malaysian work camps, some bullocks on American lumberjacks eating 5000 calories a day (unsourced bullshit) making them harder workers, and author of the oh so clever stub; "Smarth Growth". Additionally, he believes that there is a correlation between higher minimum wage and unemployment, despite the rest of the western world, Canada included, having higher employment rates than the average American city as well as higher wages.I guess I'm quite bitter, for being removed for no good reason,and having quality articles revised by amateurs who had no knowledge in the field. Check out RJensen's revisions in Islamic history related articles; laughable. Also, check out them revising the massive edition to the article on my own religious denomination cited with material produced directly by the same... what bullocks..

So I guess that's the end of that.

So I guess this is the A.A group for ex-conservapedians, "My name is Jeff, and I was a conservapedian (however briefly.. a monthish)".

Additionally, I found some things I'd written on conservapedia on this site in your "what's going on feature".

Totally kicked Andy's ass in that shallow mockery of an essay, "Liberal Denials about History".

Also, I got bored and troll'd them this morning, decided to have a proper farewell.

To this date, Dec 30 2009, Conservapedia maintains these essays that I wrote and attributed to myself properly and asked to be removed when I was banned.

Blatant Idiocy in edits made to change my work[edit] 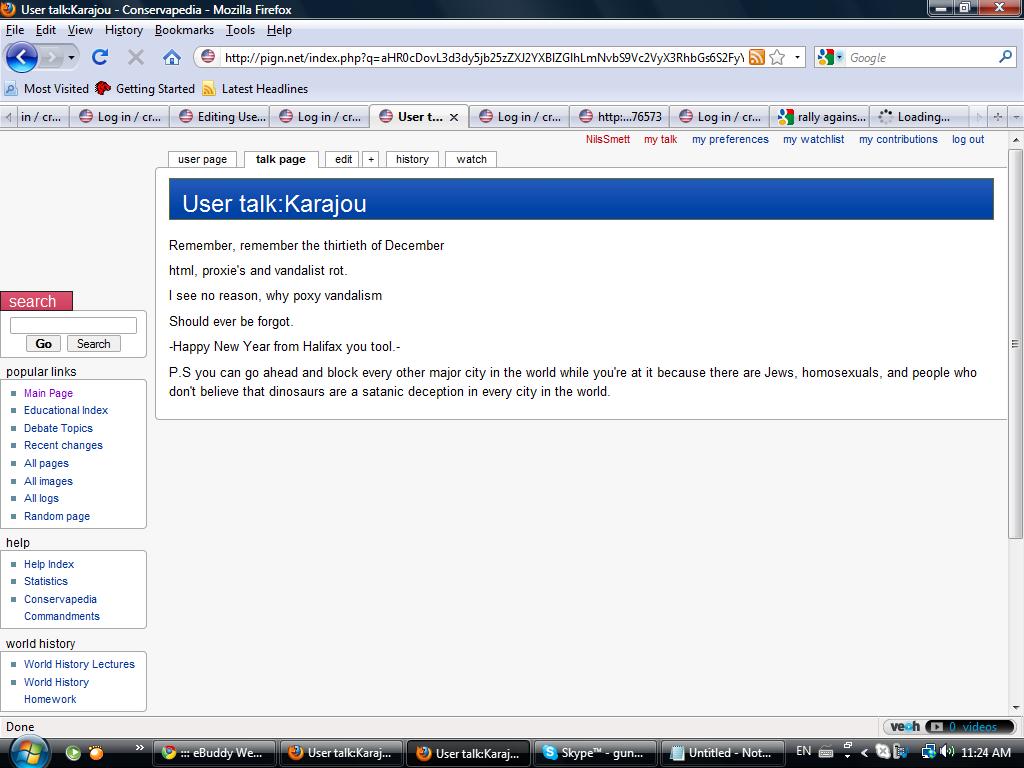 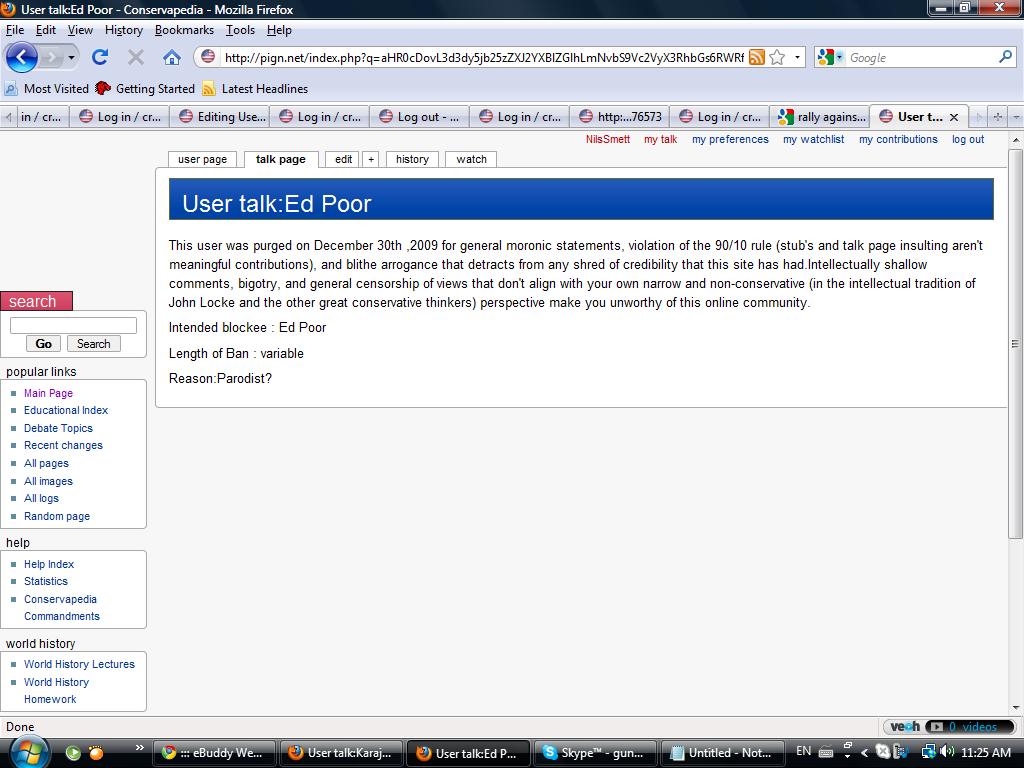 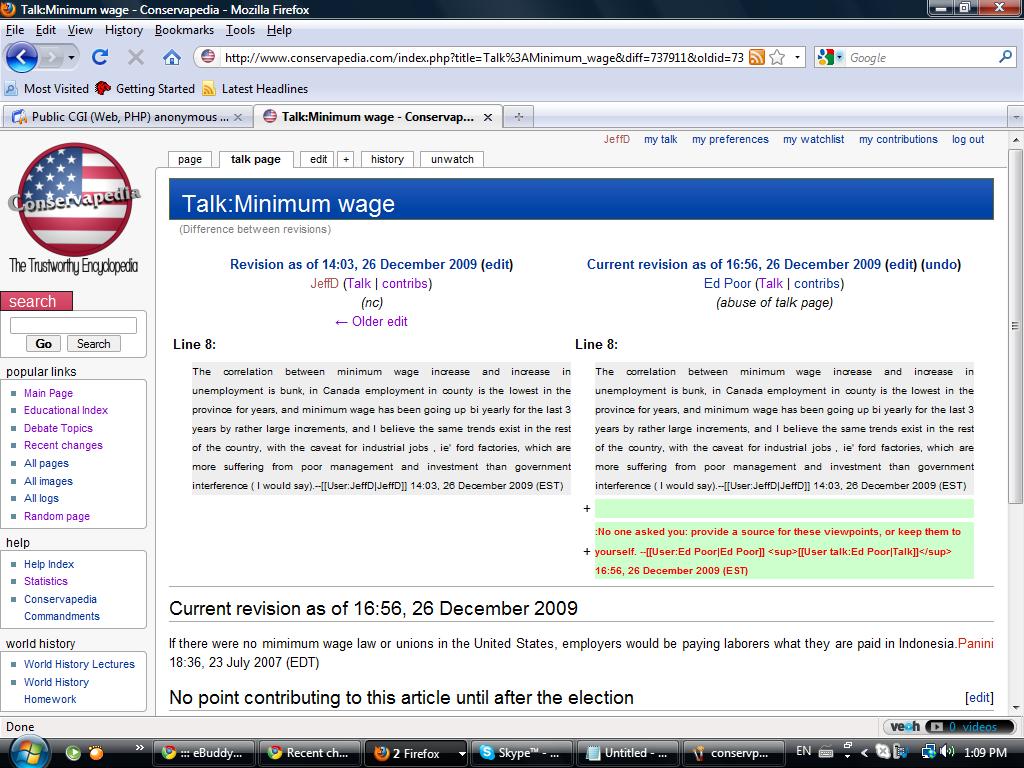 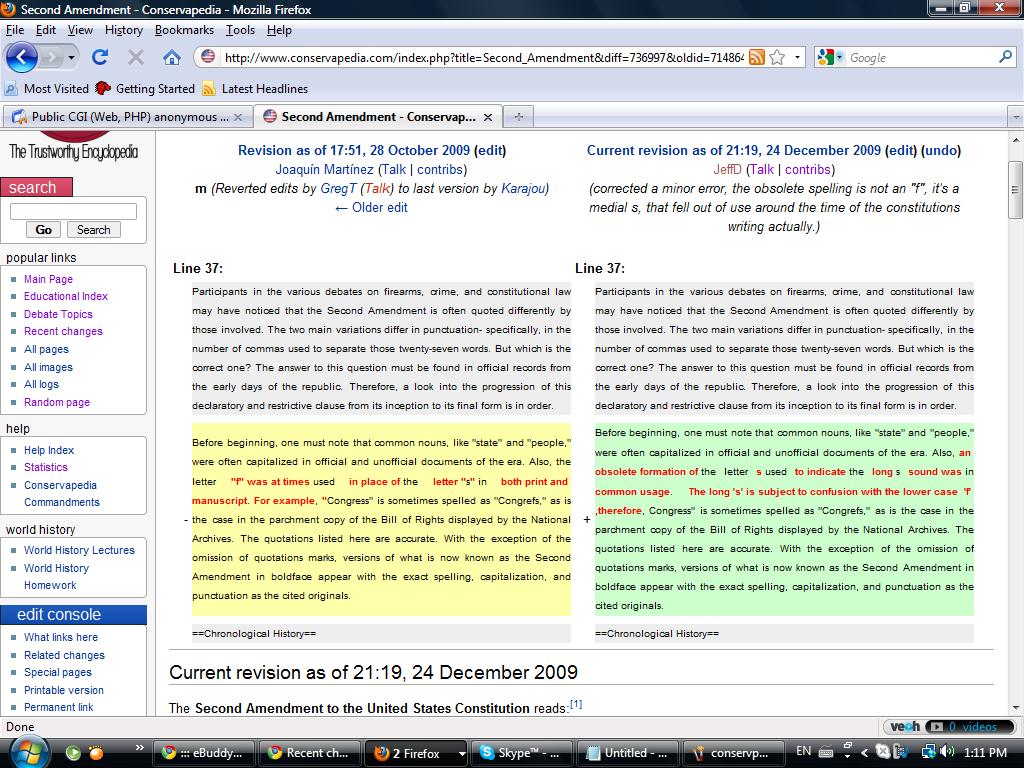 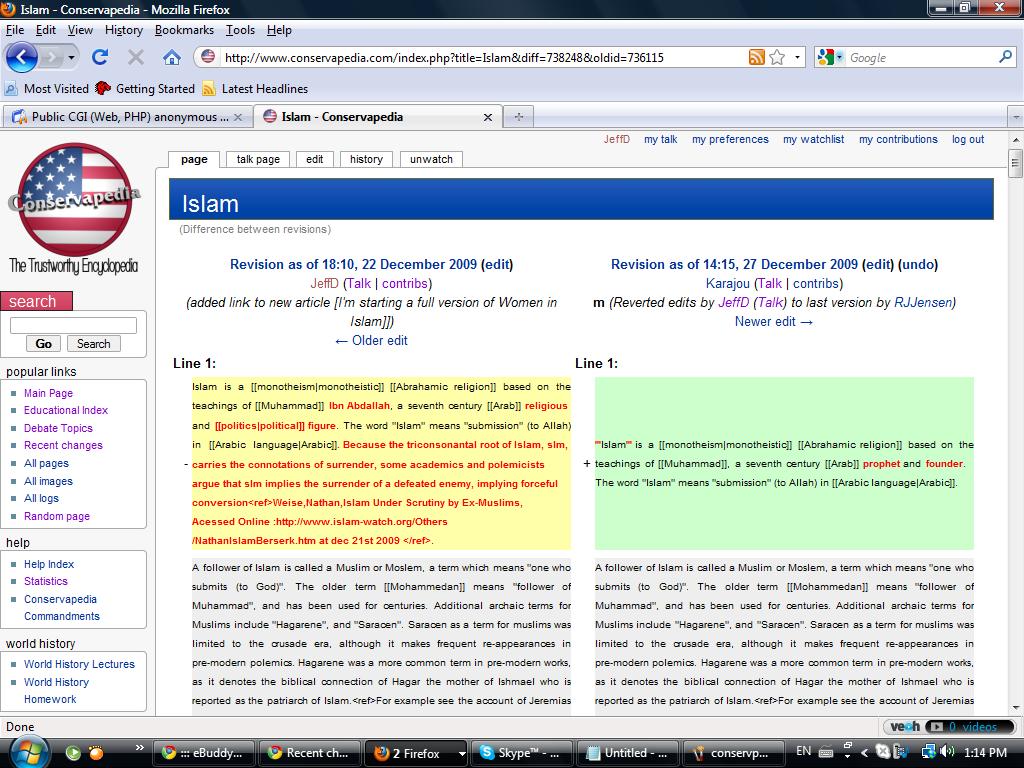 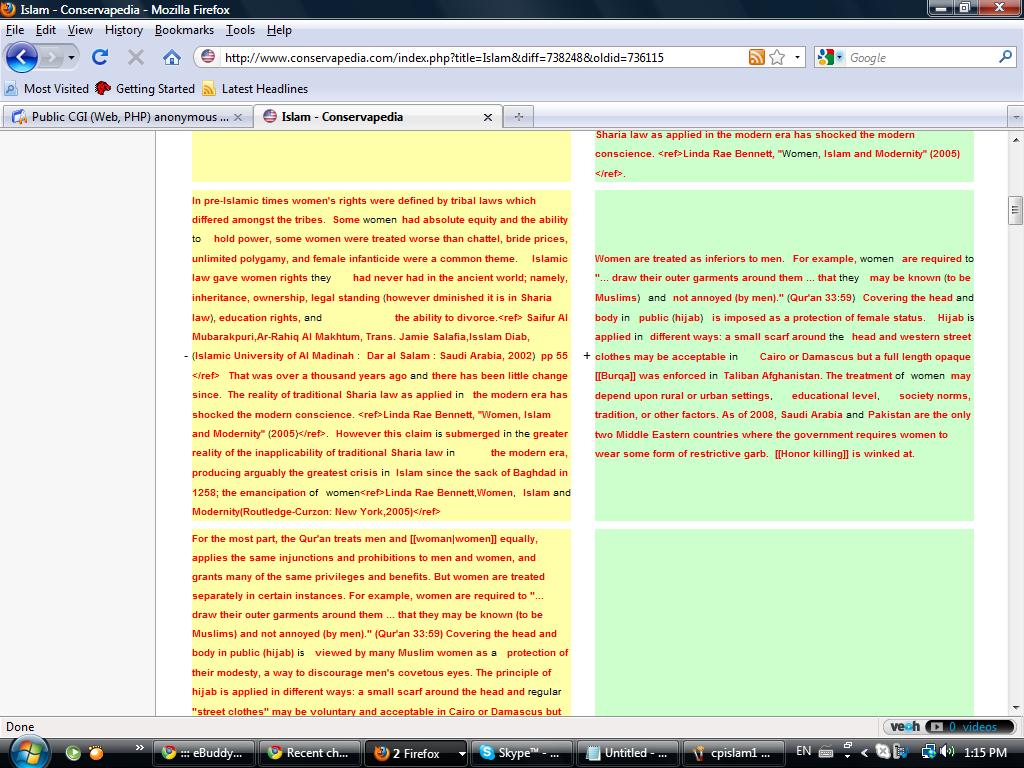 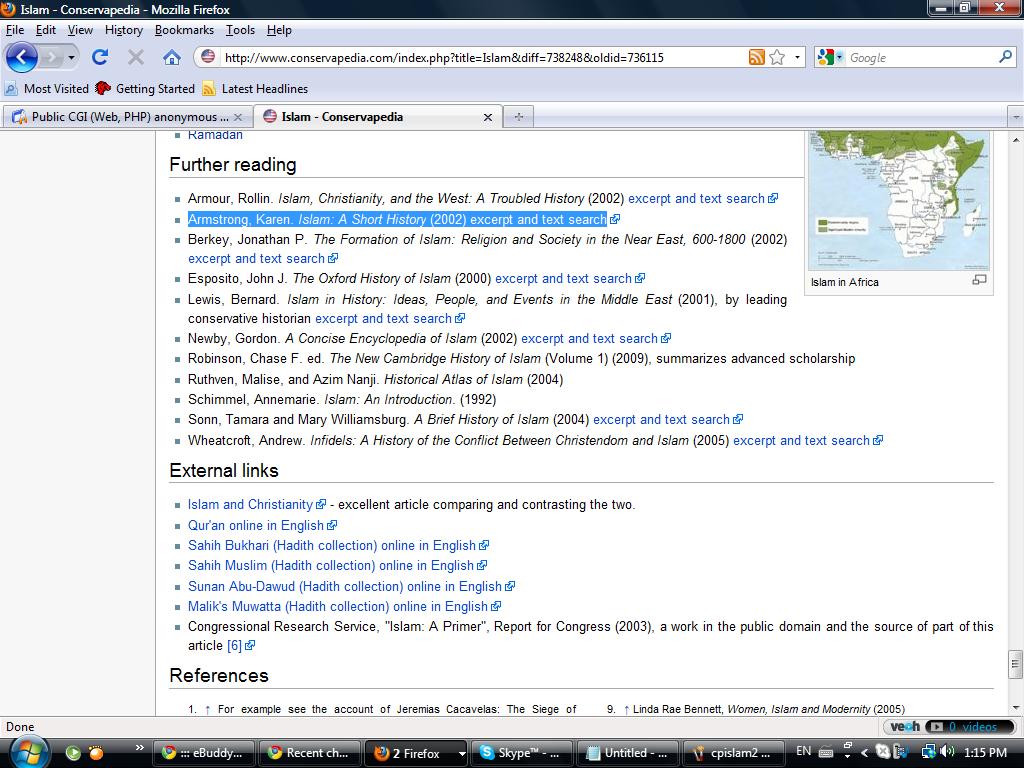 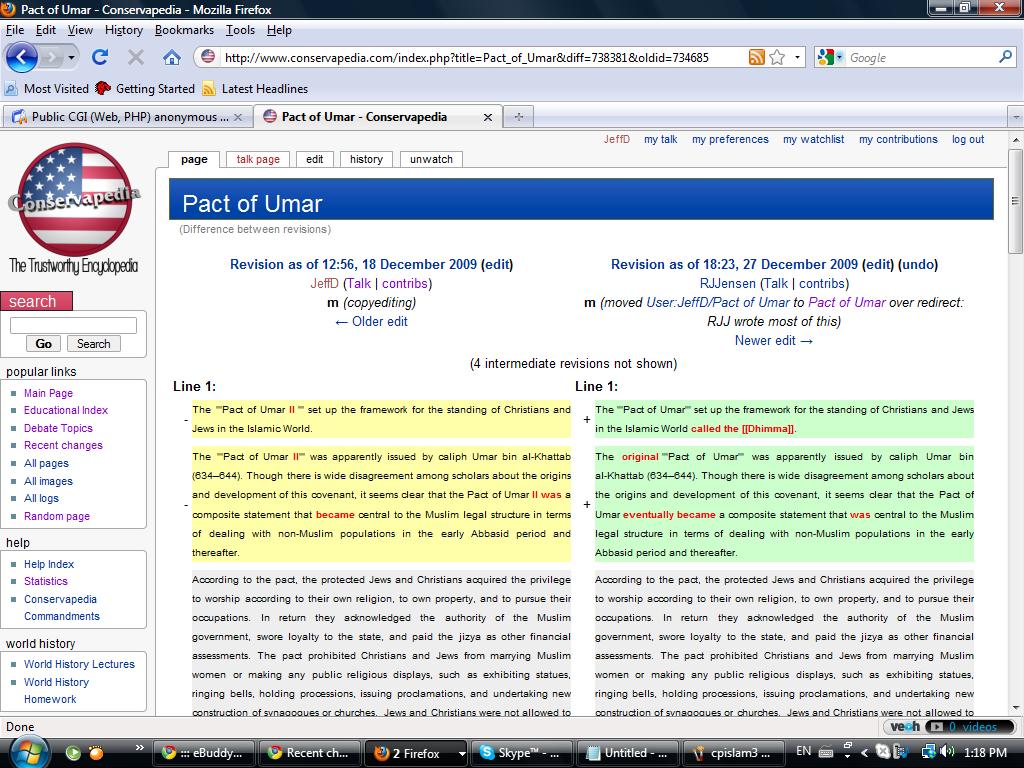 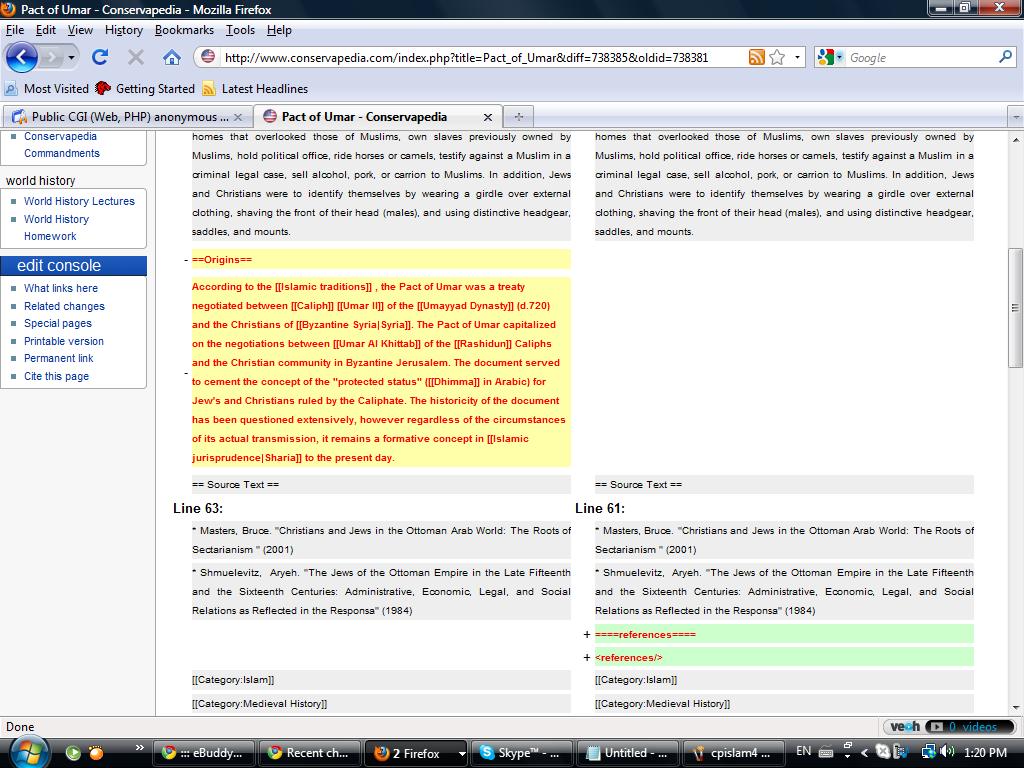 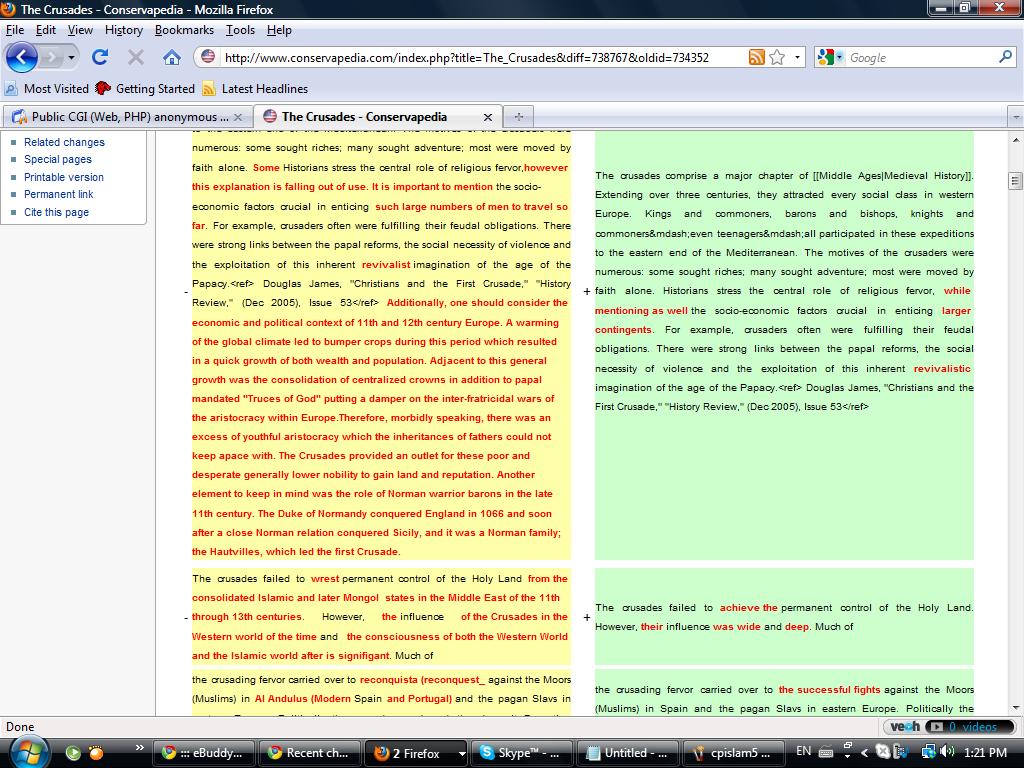 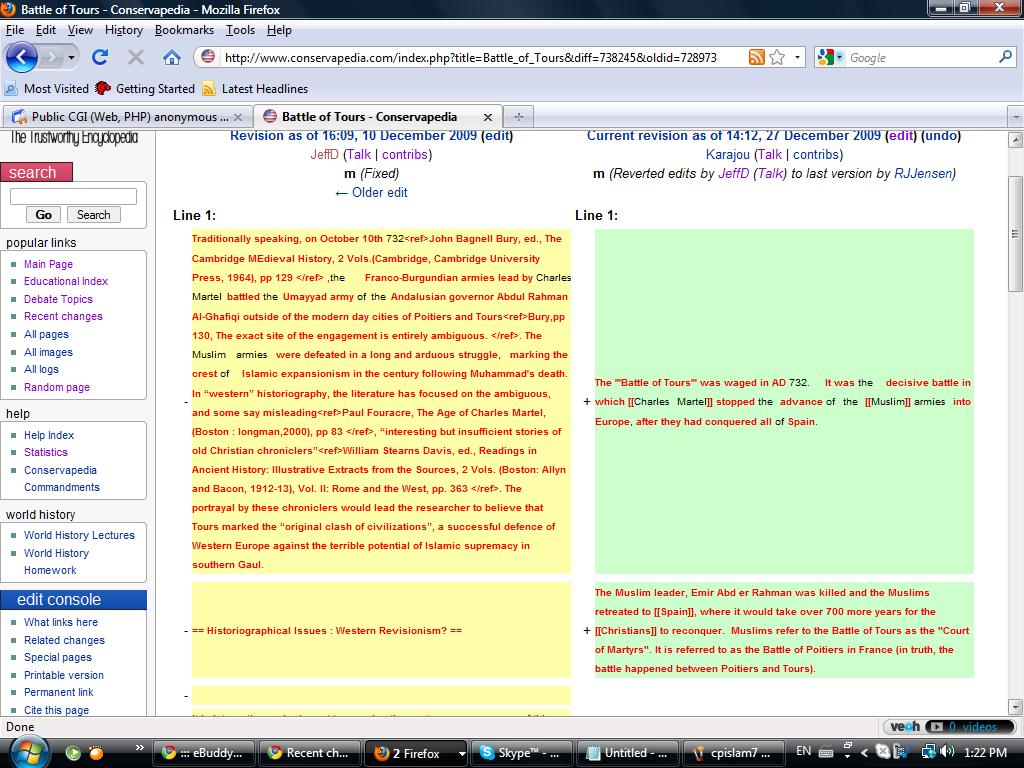