The totalitarian and incomprehenſible Realm of one Mr. Publius' almost certainly inſane Brain: preſented here to the gentle Reader for his Amuſement and general Edification by the humble Author.[edit]

I am just another poor soul hopelessly fascinated by science, history, and philosophy. I first came to this absolute cowpat of a website after reading its highly amusing Annals of Schlafly, which never cease to amaze. A student of history, I'm working on a dissertation on the explosive nature of the pen in medieval society.

Being RodWeathers was fun, as Andy suddenly gave me a magical banhammer out of the blue (he really likes sycophants). Inexplicably, even after he removed my rights along with Bugler's, he, Ken, Karajou, and TK were never sufficiently convinced that I was a parodist until I posted a suicide note and outed myself to TK by email hours later. 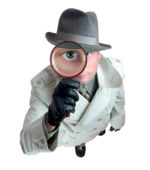 Can Gentleman Publius find the hidden purpose? (Thanks Ken)

If there truly exists a Platonic form of "insanity," this man exemplifies it in almost the purest form. Every article he touches becomes worse, as he inserts awkward phrasing, incomprehensible quotations, and moar hilarious images than are necessary. I've loved him ever since he encouraged me, "Gentleman Publius," to discern the hidden clue in his incomprehensible Red Telephone message. Sherlock Holmes himself would have given up the case, for all its singular curiosities.

Ken's emails make as little sense as his shoutouts. He rattles on about google rankings when you haven't asked, what the "public wants to know," and inexplicably, goes by the name David Jensen. Methink he thinks he is a secret agent.