This is the ongoing analysis of Citizendium's active (and not-so-active) editors. The table here, which breaks down an editor's contributions into specific months, calculates an average edit rate, and determines how "active" an editor is using real numbers (mostly integers). 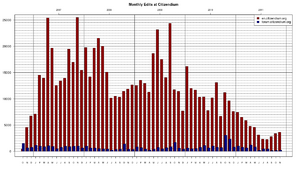 But this isn't much of a problem: though some of the forum's discussions may seem vivid as they are vicious, the number of editors involved and comments made is comparatively small. (The data for forum.citizendium.org was taken from the forum's own nice page on its stats).

The busiest 50 38 of these editors can be found in the following table. 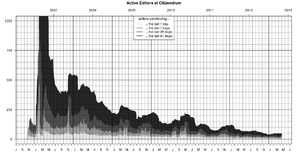 Citizendium's own page statistics includes an entry on active users. The numbers aren't very impressive, but Citizendium was at least able to overtake Conservapedia in Nov 2010.