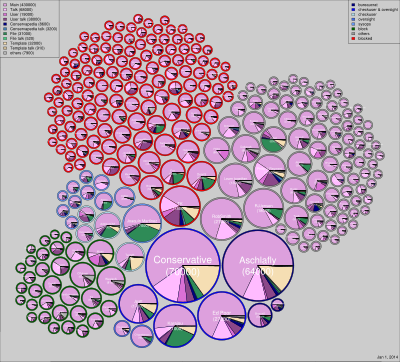 This page is an ongoing analysis of Conservapedia's active (and not-so-active) editors.

These numbers are a rough guide to how these labels are applied. Contributions during the most recent three months have been selected as one of the criteria for assigning an "activity level": Out of ≈ 26,100 editors who left their mark on Conservapedia, 337 did so over the last three months, showing various degrees of activity:

The busiest 50 of these editors can be found in the following table.

This table breaks down an editor's contributions into specific months, calculates an average edit rate, and determines how "active" an editor is using real numbers.

Averages are calculated from date of first edit.

The recent average is the average of the last three months.

A blank entry, rather than a 0, denote the months before a user registered with Conservapedia.

The table includes those editors who made the most comments over the last three months.

In March 2011, we find this little exchange on Conservapedia's main talk page:

Wikipedia just admitted that its retention rate for editors has dropped from 40% to 12%. See: http://strategy.wikimedia.org/wiki/March_2011_Update . What they won't admit is that they have allowed politicized cabals to systematically drive off any editors that don't agree with their ultra-liberal world view! Fongman 12:14, 12 March 2011 (EST)

Has anyone here worked out statistics like this for Conservapedia? What is our editor retention rate? --DanN 15:25, 12 March 2011 (EST)

Don't have a numeric answer, but based on experience our retention rate of quality editors is quite high. For example, there were three quality editors who registered at Conservapedia at the very beginning of the massive publicity in February 2007. Two of those three (none of whom I have ever met personally) are still frequent editors today.--Andy Schlafly 17:11, 12 March 2011 (EST)

This gave rise to a little news bit on the main page:

A visitor here posts that "Wikipedia just admitted that its retention rate for editors has dropped from 40% to 12%. [1] What they won't admit is that they have allowed politicized cabals to systematically drive off any editors that don't agree with their ultra-liberal world view!"

Isn't that amazing? The Wikimedia Foundation undertakes a research to better understand the internal dynamics of our communities, publishing hundreds of pages of data, diagrams and conclusions, while Andrew Schlafly is able to identify the inherent problems in a single sentence. So would it help Wikimedia to get rid of its politicized cabals? Let's have a look at the data for Conservapedia, which is absolutely free of an ultra-liberal world view!

For the scope of this survey, we use the definitions of Wikimedia's research project, especially:

The term new Conservapedian or new editor will be used analogously.

Let's first have a look at the data from August 2009 until July 2010 (taken from Wikimedia's Editor Trends Study):

But perhaps this isn't such a great idea, here another pic for Conservapdia, where the scale for active editors is inflated by the factor 100...

For short: Wikipedia's failure to retain its editors is something Conservapedia can only dream of. But perhaps wikipedia should try Andrew Schlafly's approach and define an entity called quality editor: an editor who is likely to stay around. That would improve the retention rate of quality editors dramatically. 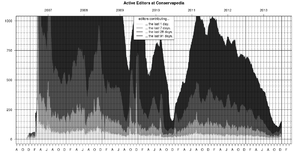 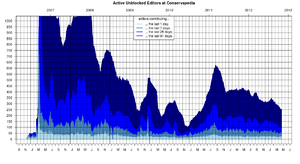 Conservapedia's own page statistics includes an entry active users. Those are defined as users who have performed an action in the last 7 days, while at the similar page at Wikipedia, this period is set for 30 days. For instance, on June 6th, 2009, Conservapedia counted 165 active users, while Wikipedia had 158,605. Calculating these numbers for both time periods yields this graph - though, for the graph only those users are counted which made at least one edit, and not only performed blocks, etc.

On a first glance, Conservapedia seems to attract twice at many active editors than RationalWiki. But if you take only those editors into account who aren't blocked, the situation changes dramatically: Then RationalWiki (having virtually no blocked members) takes the lead.

User(s) "Conservative" is an admin who focuses on creating a large number of articles dealing with Atheists and Evolutionists. He has been known for his marathon editing sessions and claims to be an account operated by a number of people. He operates at least two known sockpuppets. (5,783 edits)

Site owner "Aschlafly" is an admin who has edited 724 times in the last 91 days.

User "JoeyJ" does a lot of vandalism patrolling. (653 edits)

User "Karajou" is an admin who largely does vandalism blocking and check user studies. He also writes about birds. (508 edits)

User "AugustO" has been active in the Conservative Bible Project. (498 edits)

User "PeterKa" is a blocked Wikipedian who is editing history and politics while his block is pending. (421 edits)

User "AlanE" edits in the area of history and appears to be from Australia. (207 edits)

User "TerryH" is an admin who largely edits the news items on Main Page Right. (137 edits)

User "Joaquín Martínez" is an admin from Mexico who uploads photos and writes about art. (130 edits)

User "Jpatt" is an admin who largely does vandalism patrolling at this point. (112 edits)

User "JZambrano" is a long-time editor who has returned after a long absence. (80 edits)

User "PhilH" was blocked in the TAR flap (35 edits)

User "Copleston" is named for Frederick Copleston (1907-1994) and write about philosophy and theology. (26 edits)

User "GregG" has been on Wikibreak since December 21.

User "JMR10" and "DouglasA" are admins who edits rarely. JMR10 is Joaquín Martínez.