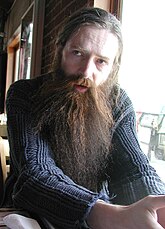 Aubrey de Grey is a life extensionist and cryonicist who claims that the first person to live to 1,000 is likely already alive.[1] Though not quite as optimistic as some about the nearness of extending life, de Grey claims someone born around the year 2000 has anywhere from a 50 to 80 percent of living much longer than the current lifespan, depending on how much funding SENS and related life extension programs receive in the near future.

PZ Myers believes immortality or even very long lifespans are impossible because the second law of thermodynamics leads to inevitable decay in any living system.[2]

In 2021, de Grey was placed on administrative leave by SENS Research Foundation over sexual harassment allegations.[3] Shortly after, he was removed from his position as he seemed to interfere with the sexual harassment investigation.[4]

This philosophy-related article is a stub.
You can help RationalWiki by expanding it.
Retrieved from "https://rationalwiki.org/w/index.php?title=Aubrey_de_Grey&oldid=2361697"
Categories:
Hidden category: