Chernobyl: Consequences of the Catastrophe for People and the Environment 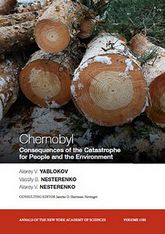 The front cover of the book

Chernobyl: Consequences of the Catastrophe for People and the Environment[2] is a pseudoscientific book-length report about the consequences of the Chernobyl disaster. This noxious turd was unleashed in 2009 from the bowels of Alexey V. Yablokov, the founder of Greenpeace Russia[3] and Russia's Green Party, with the assistance of two co-authors, Vassily B. Nesterenko and Alexey V. Nesterenko. It was published by the New York Academy of Sciences as part of its Annals of New York Academy of Sciences series.

The main claim is that the Chernobyl disaster resulted in almost a million additional deaths, of which a great deal happened in places very far from Ukraine. This contrasts with the consensus report of the Chernobyl Forum that states that 4000 additional cancer deaths could eventually be expected from the disaster.[4] Yablokov's publication also promotes a conspiracy theory which accuses many UN agencies and independent organizations such as the Red Cross of being somehow paid by the nuclear industry in an effort to hide the truth.[5] The Academy released a statement distancing itself from the content of the report, and a review by one of its members considered it to be of no scientific value.

The New York Academy of Sciences has distanced itself from the report, issuing a disclaimer[6] that reads, in part:

The absurdly high number of claimed deaths is arrived at by completely ignoring dosimetry and abandoning any attempts to correlate illness and deaths with radiation exposure. The report uses two alternative methodologies. The first one, the ecological or geographic approach, arbitrarily picks some control areas which are considered uncontaminated and then ascribes any additional deaths in other areas to radiation, even if the deaths are from completely unrelated diseases (e.g. liver cirrhosis or suicide). This approach was repeatedly demonstrated to lead to erroneous conclusions. The second methodology tracks changes in health indicators in specific areas over time. This is doomed to fail, as the areas affected by the Chernobyl disaster suffered a great deterioration of their public health systems following the collapse of the Soviet Union. Under this approach, any possible increase of mortality from radiation is drowned in the mortality from inadequate health care.[1]

The book was widely criticized for contriving a deeply flawed methodology, cherry-picking the publications to analyze, using unreliable sources such as the media and websites of environmental organizations, and inconsistencies and contradictions in the text.[1][7][8] Despite these obvious flaws, the report was praised by anti-nuclear activists[9] and quickly heralded as a proof of the nuclear industry colluding with WHO to hide the death toll of Chernobyl.

The Russian edition of the book contains logos of the Bellona Foundation and Greenpeace in its front matter,[10] indicating that these two organizations will endorse complete pseudoscience as long as it furthers their ideological goals. Furthermore, contrary to what the title implies ("Catastrophe for [...] the Environment"), the area around Chernobyl is now considered a wildlife sanctuary[11] doing better without human presence in spite of the high radiation levels (in other words, while debate surrounds the actual health of wildlife in general and the amount of biodiversity, human presence is determined to be more damaging than radiation). Poaching can be a problem, however. Either way, Greenpeace needs to rethink its strategy.