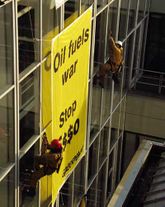 Greenpeace demonstrating against Esso, international trade name for US oil giant ExxonMobil and its related companies, on March 6, 2003.

Greenpeace is an influential international science cherry-picker environmentalist organization[2] and environmentalism cult with presence in 40 countries across Europe, the Americas, Asia, Africa and the Pacific. It was founded in 1971.[1] Headquartered in Amsterdam, Greenpeace has 2.8 million supporters worldwide.[3]

The organization is known for its flagship carrier Rainbow Warrior, a sea vessel used to protest nuclear testing which was destroyed in a bombing by French agents. After the sinking of the first vessel, it started operating a second vessel also named Rainbow Warrior, sometimes called Rainbow Warrior 2.

The organization estimates that approximately 150,000 people die every year due to climate change.[2] Greenpeace is known for using eye-catching demos in protest gatherings.[4] There have been incidents of human rights violations against Greenpeace anti-whaling activists.[5][6]

Greenpeace is a prominent voice for reduction of anthropogenic global warming,[8] monitors climate change,[9] and opposes whaling. In February 2010, the organization opposed a proposal by the International Whaling Commission (IWC) that advocated reintroduction of commercial whaling in the Southern Ocean.[10] It also organizes many local initiatives, such as the campaign to strengthen the laws protecting the Białowieża Forest, the last primeval forest

Unfortunately, Greenpeace is also engaging in some anti-science actions. The most important ones are the dissemination of propaganda against nuclear power based on recycled, thoroughly discredited studies,[12] and while campaigns for strengthening GM labelling laws may garner a "meh" reaction,[13] its nearly dogmatic opposition to all forms of genetically modified food is much more sinister.[14][15]

The latter includes publicly funded or humanitarian uses, such as the Golden Rice Project, an attempt to cure chronic vitamin A deficiency in the developing countries using a genetically modified variety of rice that contains a high level of β-carotene.[16] The organization has sabotaged fields and deliveries of GM crops.[17][18] In at least one instance, Greenpeace was legally forced to retract an anti-nuclear advertisement that was found to contain misinformation.[19] In another incident, Greenpeace accidentally distributed unfinished leaflets that demonstrate their approach to informing the public:

One of Greenpeace's founders, Patrick Moore[21] quit the organisation in the 1980s and became one of its more vocal critics. He has made appearances on Penn and Teller's Bullshit! and PragerU[22] criticising how the group has turned more anti-government/anti-science and less pro-environment since its founding; nonetheless he likes to take some bullshit positions as well.

In general, Greenpeace's modus operandi can be characterized as "act first, do the science later." While their actions are well-intentioned, this is not always the best approach. It has caused the organization to remain committed to a few positions of very dubious scientific credibility.

In November 2014, Greenpeace had a key role in scrapping the post of European Union's Chief Scientific Adviser.[23] This was a direct reaction to the Adviser, Anne Glover, expressing views unapologetically supporting the scientific consensus on the safety of genetically modified food. Greenpeace opposed the existence of this position ostensibly because it 'concentrated too much influence in one person'. In reality, a Chief Scientific Advisor would severely limit Greenpeace's ability to use bullshit 'reports' from fellow think tanks as misrepresentations of consensus, which would in turn make it much harder for them to push unscientific policies at the European level.

In December 2014, members of Greenpeace laid out enormous yellow cloth lettering right beside the hummingbird design in the Nazca lines in Peru. The message, very visible from the air, was TIME FOR CHANGE! :: THE FUTURE IS RENEWABLE :: GREENPEACE. Public reaction was extremely negative, and led to an official apology. This demonstration also caused potentially irreparable damage to the Nazca site. [24]

A number of studies have shown that the best way to reduce your impact on the environment is to give up on animal products.[25] However, despite the environmental damage caused by meat farming, dairy farming, and sea fishing, Greenpeace refuse to promote veganism as a solution; this criticism of Greenpeace was a feature of the 2014 film Cowspiracy

(although the film may go a little far with its conspiracy-theorising). Greenpeace claim they don't call for veganism because it is not appropriate for "someone who relies on subsistence farming or fishing for survival."[26] This is a strange argument, as the vast majority of people in the developed world - the areas where Greenpeace is based, gets most of its funding, and does most of its campaigning - are not subsistence farmers. Similarly they are happy to support a ban on commercial whaling while considering subsistence whalers as a separate case.[27] Regardless of your opinion on the merits of veganism, it's odd for the organisation to refuse to endorse something which has clear, scientifically-demonstrated environmental benefits. One explanation is they don't want to alienate their many non-vegan supporters, and prefer to campaign on issues which get more good publicity while requiring only trivial lifestyle changes (e.g. boycotting drinking straws, not eating whales).

Dispute over whether or not Patrick Moore was co-founder[edit]

Greenpeace has taken steps to remove all records of co-founder Dr. Patrick Moore's historical contributions from the foundation's active website and currently lists only their criticisms of him (with the exception of the site's archives).[28][29][30][31] As noted by Moore himself and several websites, Google followed suit in March 2019 and removed him from its list of the founders of Greenpeace.[32][33][34]