From RationalWiki
(Redirected from Dyke)
Jump to navigation Jump to search 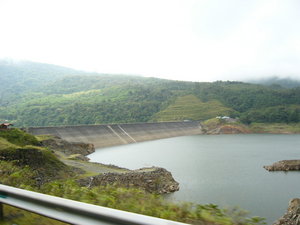 A dyke (alternate spelling: dike) is an embankment used to control the flow of rivers, often for agricultural purposes, although they may be used for general flood control.[1] Not to be confused with similarly spelled dick which may be used to plug a leaky dyke in times of dire need.

Dykes may be found the world over,[2][3] and in some cases prove to be popular tourist attractions.[4] 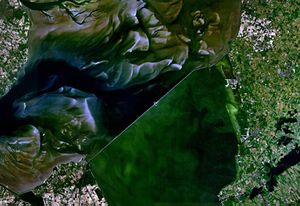 Satellite image of the Afsluitdijk

Perhaps the greatest exponents of water and flood management, the Dutch have been building dykes for more than 800 years. As a consequence, in the Netherlands there is a saying: "God created the Earth but the Dutch made Holland". In 1927, the Dutch government embarked on a huge civil engineering project to protect the country from flooding. This resulted in the Afsluitdijk (dijk is the Dutch word for dyke) which was until April 2006 the longest dyke in the world. The completion of this dyke in 1933 effectively isolated the salt-water Zuiderzee (Southern Sea) and commenced the transition into the freshwater IJsselmeer.

In the English speaking world there is a famous legend of a small boy (Hans Brinker) who upon passing a dyke on his way to school noticed a slight leak as the water trickled in through a small hole. Knowing that the running water would gradually make the hole bigger, the boy poked his finger into the hole to stem the flow of water even though he knew that he would be in trouble if he were to be late for school. Later he was assisted by the men of the village who came and put other things in, so the dyke was plugged and the village was safe.

However, this story is almost unknown in the Netherlands and actually comes from a fictional work Hans Brinker or The Silver Skates (1865) by Mary Dodge.[5][6]

Greg Dyke was a legend in his own lunchtime as director general of the BBC.

On the upside, she's a total moonbat. On the downside, she's never met woo she didn't like. Oh well—she puts on a hell of a TV show.

Offa, the King of Mercia was worried about heathen Welsh hordes rampaging and pillaging, so he employed a dyke to protect his kingdom. This dyke ran along the borders of Offa's kingdom between Mercia and Wales, was earthy in nature, robust in appearance, relatively unattractive, and offered strong resistance to any Welsh man who attempted penetration. A Dyke is now a term of endearment in Wales for any object or person who puts up a strong resistance to the advances of Welshmen.