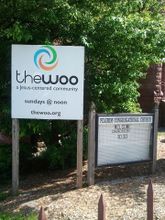 At least they're honest about it.
Not to be confused with the polygon sex act, WooHoo or the signature shout of professional wrestler Ric Flair

Woo, also called woo-woo, is a pejorative term for pseudoscientific explanations that share certain common characteristics, often being too good to be true (aside from being unscientific). The term is common among skeptical writers. Woo is understood specifically as dressing itself in the trappings of science (but not the substance) while involving unscientific concepts, such as anecdotal evidence and sciencey-sounding words.

Woo is a very effective selling point, as it usually ignores an effect of a complex phenomenon, instead putting focus on the complexity and "unexplained nature" of the phenomenon, and providing an alleged, embellished, easy to grasp, "explanation" as to why it occurs. For example: "Homeopathy is effective (even when no molecule of the active ingredient remains in the final product) because the solution retains a memory of the solute."—the explanation for these results, e.g. water memory, is woo.

Woo is used to blind or distract an audience from a real explanation or to discourage people from delving deeper into the subject to find a more realistic explanation. You can't make money if nobody buys your bullshit. (As such, "woo" that has zero paying customers is more like just ordinary batshit crazy.)

Despite the terrible name, it has become quite a popular term within the skeptical movement—probably because it's fun to say.

The term comes from "woo-woo", an epithet used in the 1990s by science and skeptical writers to ridicule people who believe or promote such things.[1][2][3][4][5] This is in turn believed to have come from the onomatopoeia "woooooo!" as a reaction to dimmed lights or magic tricks, putting emphasis on the lack of an obvious explanation in favor of chaulking it up to what appears to be sorcery. The term implies a lack of either intelligence or sincerity on the part of the person or concepts so described.

As a coincidence, the Chinese word 巫 (pronounced in the Mandarin dialect as Wū) means a shaman, usually with magic powers.[6] Also coincidentally, the Chinese word 無/无 (pronounced Wú in Mandarin) means "nothing," "lacking," or "negation." Another Chinese word 误 (pronounced in the Mandarin dialect as Wù) means "mistake" or "incorrect". There is also the English verb "woo", which means to seek someone's love, especially with false promises; it can also be considered appropriate, because woo-meisters seek people's admiration, falsely promising them miraculous and easily understandable knowledge.

Woo generally contains most of the following characteristics:

Not every characteristic need be present for something to be woo. Woo manifests itself as a gradient, rather than a binary: the more of these tactics that are used, the more likely it is that the idea is woo.

WoO (Werke ohne Opuszahl, "works without opus number") is the classification given to any originally unpublished compositions by Ludwig Van Beethoven (Für Elise(link) being the most famous example) or other composers of classical music.[7]

However, unlike woo, WoO always describes something which demonstrably exists.

Bernie Worrell, the keyboardist for Parliament/Funkadelic, Talking Heads and Claypool's Bucket of Bernie Brains, was often known as the "Wizard of Woo"; however the "woo" in this case is an onomatopoeic representation of his distinct synthesizer sounds, and not an indication that he ever dabbled in pseudoscience. 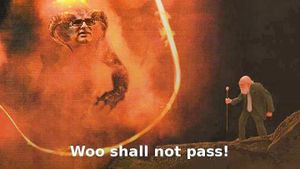 James Randi is not pleased with your woo.[8]