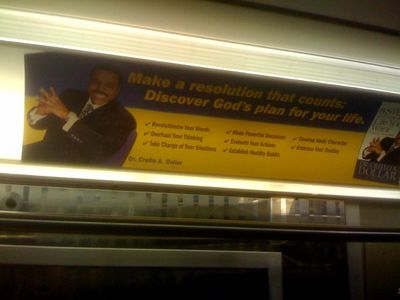 The subways, despite being restricted somewhat in permissible political content,[1] are apparently a haven for religious ads. Ads range from "Free Abortion Alternatives" (which are... what, exactly???) to Spanish language contraception ads, sponsored by Planned Parenthood, to "Philosophy Works," to, apparently, inspirational book ads.

Incidentally, on the subway, outright Christian ads like the depicted one are fairly rare. More common are ads attempting to appeal to spiritualists. "Philosophy Works," mentioned above, is exceedingly common, and describes to the straphanger how one's life can be improved, and made sense of, through the study of philosophy at a local academy. I try to illustrate in the following pictures how this vague sense of spiritualism, and post-religious right Christianity, are both important themes of Christianity in New York City. 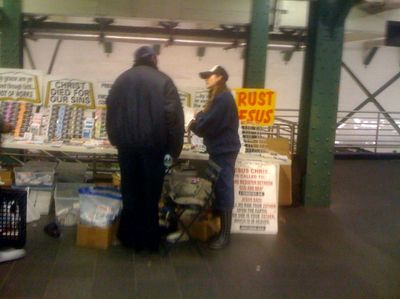 Street preachers are actually not all that common in New York. The one exception to the general rule is the average rambling homeless person, and, of course, the underground population of Times Square / Port Authority. On a typical day, one can expect to encounter at least the above display, and between one and five greeters, handing out white paper pamphlets with the heading "RAPTURE." Additionally, the walking link between Port Authority and Times Square features depressing overhead messages - "Why go on? Life is so hard." - culminating, apparently, in the depicted scene. One can only imagine that the goal is to depress, and then inspire, which to me seems counterproductive. Nevertheless, the greeters are rarely engaged in discussion, and the flyer table is most often barren of visitors. 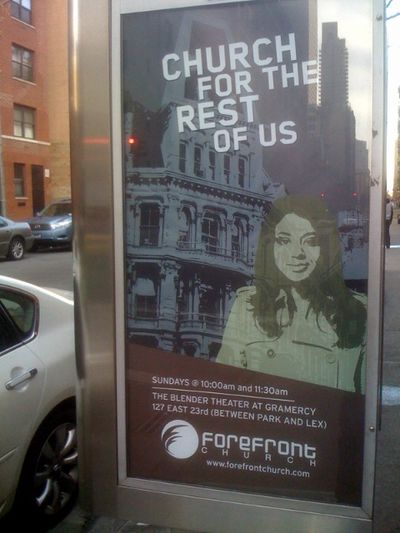 One of the most visible and unique parts about Christianity in New York is a tendency to make religion different and new: it's not old religion, and if it is old religion, it tends to be fundamentalist religion. At least in public spaces, it seems that there are two poles: fundamentalist street preachers, and "church for the rest of us" - that is, church designed to appeal to generations that want something more updated, and new.

Say, for example, church in a theater recently frequented by comedian Paula Poundstone,[2] and Dashboard Confessional. There's no clearer way to say, "we're trying to build a modern, post-religious right Christianity here." It evinces, I think, the effect that the triumph of the religious right elsewhere in America has had upon the liberal Mecca, New York. People alternately flock to defend the faith in a hostile city (see the above pictures), or try to redefine their religion as, well, less religious. 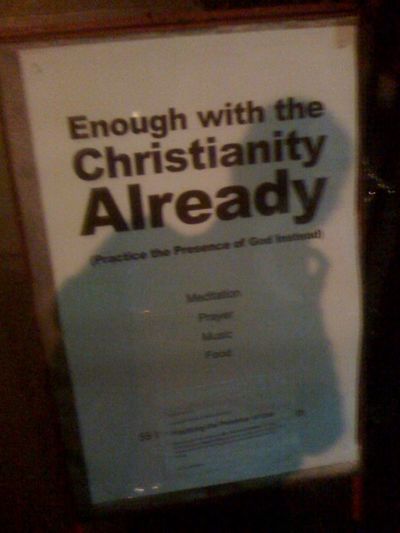 To prove the point even further, this sign appears outside of a church on Washington Square South, next to some NYU buildings. The Church prominently displays on its exterior a death count of U.S. & Allied Soldiers in Iraq, and a death count for Iraqi civilians. It also displays a sign proclaiming, "The America I believe in would close Guantanamo Today."

This is clearly Christianity, turned to a liberal purpose, a goal recently attempted by some Christians politicians.[3] More importantly, though, it's a Christianity that seems to have given up entirely on doctrine, while attempting instead to inculcate benevolent, non-sectarian spirituality. 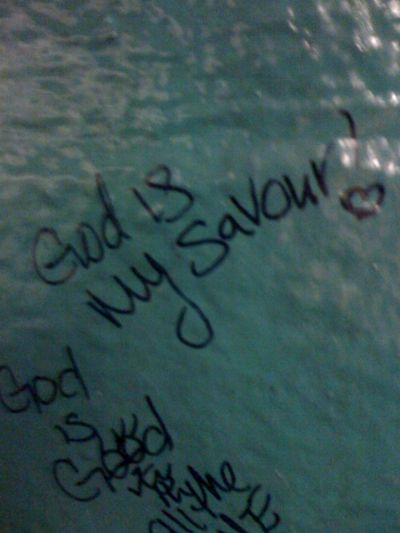 I'm not sure what I think about this. On the one hand, it's kind of funny. Misspelling "savior"? And on the other hand, it's telling - religious expression among the potentially uneducated, or English-as-a-second-language population. Or the young? But then again, I don't want to infer a larger trend from one misspelling. To the extent that the rest of this essay presumes grand conclusions from scant evidence, my argument is that the other themes listed here are fairly common, while this one is an outlier. Accordingly, I'd like people to draw their own conclusions about this, and please post them below.

I, the creator of the images used in this work, release all rights to the images, but kindly request attribution for reuse of the photographs or their context.