Well to start this off I plan to write my hypothesis about the lowing of intelligence of mankind based on the Theory of Evolution as it is affected but population growth of holy rollers.

"And God blessed them, and God said unto them, be fruitful, and multiply, and replenish the earth, and subdue it: and have dominion over the fish of the sea, and over the fowl of the air, and over every living thing that moveth upon the earth." King James Version, Genesis 1:28

"Scientists and Religion in America"[edit]

Contrary to the notion fostered by so-called 'creation-scientists', Albert Einstein did not believe in a personal god.

A recent survey of members of the National Academy of Sciences showed that 72% are outright atheists, 21% are agnostic and only 7% admit to belief in a personal God.[2]

Do You Believe in God?"[edit]

2. Warren and Heist, 1960 Found no differences among National Merit Scholars. Results may have been affected by the fact that NM scholars are not selected on the basis of intelligence or grades alone, but also on "leadership" and such like.

3. Southern and Plant, 1968 Studied 42 male and 30 female members of Mensa. Mensa members were much less religious in belief than the typical American college alumnus or adult.

1. William S. Ament, 1927 C. C. Little, president of the University of Michigan, checked persons listed in Who's Who in America: "Unitarians, Episcopalians, Congregationalists, Universalists, and Presbyterians [who are less religious] are… far more numerous in Who's Who than would be expected on the basis of the population which they form. Baptists, Methodists, and Catholics are distinctly less numerous."

Ament confirmed Little's conclusion. He noted that Unitarians, the least religious, were more than 40 times as numerous in Who's Who as in the U.S. population.

Unitarians were 81.4 times as numerous among eminent scientists as non-Unitarians.

3. Kelley and Fisk, 1951 Found a negative (-.39) correlation between the strength of religious values and research competence. [How these were measured is unknown.]

4. Ann Roe, 1953 Interviewed 64 "eminent scientists, nearly all members of the prestigious National Academy of Sciences or the American Philosophical Society. She reported that, while nearly all of them had religious parents and had attended Sunday school, 'now only three of these men are seriously active in church. A few others attend upon occasion, or even give some financial support to a church which they do not attend… All the others have long since dismissed religion as any guide to them, and the church plays no part in their lives… A few are militantly atheistic, but most are just not interested.'"

5. Francis Bello, 1954 Interviewed or questionnaired 107 nonindustrial scientists under the age of 40 judged by senior colleagues to be outstanding. Of the 87 responses, 45 percent claimed to be "agnostic or atheistic" and an additional 22 percent claimed no religious affiliation. For 20 most eminent, "the proportion who are now a-religious is considerably higher than in the entire survey group."

7. Vaughan, Smith, and Sjoberg, 1965 Polled 850 US physicists, zoologists, chemical engineers, and geologists listed in American Men of Science (1955) on church membership, and attendance patterns, and belief in afterlife. Of the 642 replies, 38.5 percent did not believe in an afterlife, whereas 31.8 percent did. Belief in immortality was less common among major university staff than among those employed by business, government, or minor universities. The Gallup poll taken about this time showed that two-thirds of the U.S. population believed in an afterlife, so scientists were far less religious than the typical adult.

The consensus here is clear: more intelligent people tend not to believe in religion. And this observation is given added force when you consider that the above studies span a broad range of time, subjects and methodologies, and yet arrive at the same conclusion.

This is the result even when the researchers are Christian conservatives themselves. One such researcher is George Gallup. Here are the results of a Fall 1995 Gallup poll:

Percentage of respondents who agreed with the following statements:

Why does this correlation exist? The first answer that comes to mind is that religious beliefs tend to be more illogical or incoherent than secular beliefs, and intelligent people tend to recognize that more quickly. But this explanation will surely be rejected by religious people, who will seek other explanations and rationalizations.

A possible counter-argument is that intelligent people tend to be more successful than others. The lure of worldly success and materialism draws many of these intellectually gifted individuals away from God. After all, who needs God when you (apparently) are making it on your own?

However, this argument does not withstand closer scrutiny. Most of the studies outlined above describe the religious attitudes of students, who have yet to enter the working world, much less succeed in it. Some might then argue that the most intelligent students are nonetheless succeeding in school. But "success" in school (for those who may have forgotten!) is more measured in terms of popularity, sports, physical attractiveness, personality, clothes, etc. Grades are but one of many measures of success in a young person's life -- one that is increasingly becoming less important, as many social critics point out.

The simplest and most parsimonious explanation is that religion is a set of logical and factual claims, and those with the most logic and facts at their disposal are rejecting it largely on those grounds.

Here's the graph of religiosity is taken from the Pew PollCite error: Closing </ref> missing for <ref> tag </ref>, and IQ.

Note that while the IQ data for each individual country needs to be taken with a grain of salt, overall the trends correlate well with independent measures like the Third International Mathematics and Science Survey as well as GDP-per-capita. To reiterate religion and IQ are strongly negatively correlated (-.886), even more so than GDP-per-capita and IQ are strongly positively correlated (.757 w 1998 per-capita stats). 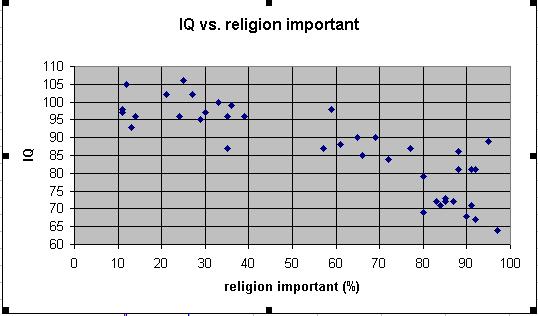 America is an outlier: the only country that couples a high mean IQ (98) & GDP-per-capita with a relatively high level of religiosity (59%).

The children of low IQ parents are likely themselves to have low IQs, and they are being treated like an endangered species, which must be removed from the family nest and carefully brought to breeding age under careful supervision, before being released into the wild to contribute to the breeding population of their species. This program may already be having some effect on the situation. Phillippa Russell, the Commissioner for Disability Rights, is quoted as saying: ' … there are far more people with learning disabilities living in the community now, having ordinary relationships and having children'. Meanwhile, the hated 'middle class', which is likely to be endowed with above average IQ, forethought, etc. in a society which is heavily geared against them, is already contributing proportionately less to the breeding populations of the future. The trend to smaller middle class families looks set to continue, as, under the influence of debts incurred in paying for university courses and rising taxes on property, apart from other factors, their sense of responsibility and forethought lead them to put off starting their families until an ever later age, and to curtail their numbers on account (among other things) of their wish to provide adequately for their education.