Essay:Gaming the language: the US political spectrum

This cheesy graphic uses a multi lane highway as its analogy. The double yellow line divides the popluation into halves at the center. Moderates, of course, occupy the middle four lanes or so, leaning a bit to the left and a bit to the right. The "Left" and "Right" are further from the center, with two lanes each. Each "wing" also has its "Loony" contingent, coasting down the breakdown lanes. 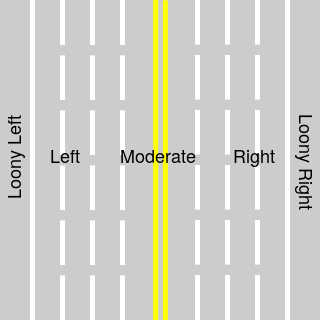 The New Distribution of Political Views[edit]

Here we see the result of twenty-five years of relentless work on the part of the GOP, right wing talk radio, and the various groups exploiting "wedge strategies" to split people off to the right, often based on only one or two issues.

The left breakdown lane is where all identified "leftists" are stuck, and all are called "loonies". The moderates have one lane, and even it is identified as being "left" of the "new center". The right occupies the remaining seven travelling lanes, and anyone they are truly embarrassed by is still relegated to the breakdown lane.

Please note that in spite of the way this image skews the political orthodoxy, the double yellow lines still have 50% of the population on each side of them. 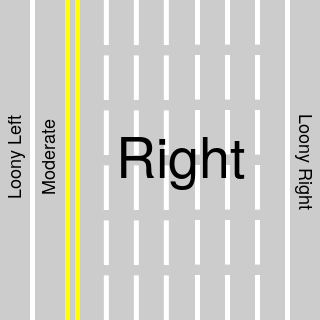 The "right" has truly become a "big tent"!

This technique of gaming the language has the result of the 20% or so of the population that are conservatives (but not loony) claiming to be 70% of Americans - and, sadly, getting a lot of politicians and people in the media to believe them.