I think it's an understatement to say that fascism gets a bad rap. For example, a number of comments have been made on the fascist nature of Conservapedia, as if this were a bad thing. It is also often conflated[1] with Nazism. (To remedy the latter complaint, I offer this analogy: Nazism is to fascism as Zionism is to Judaism.) This is all very unfair. Fascism isn't all that bad, as you shall see. It has lots of things going for it.

Sociopaths are treated as viable members of society[edit]

Fascism is the only political philosophy which allows, even encourages, sociopaths, pathological liars and other so-called "undesirables" to become productive members of society. In a fascist society, sociopaths like Joseph Goebbels, Josef Mengele, and Andrew Schafly, who would have otherwise been unemployed and still living in their parents' basement at the age of 35, are allowed to contribute to society. ...Oh, wait a minute, Andrew Schafly is unemployed and living in his mother's basement at 35.

Minorities are never happy. It's always whine, whine, whine with them. If their lives are so terrible, why don't we just put them out of their misery? 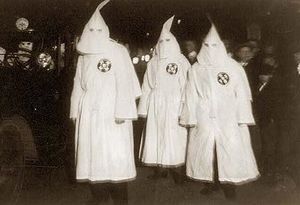 C'mon, admit it. You think those robes are cool, don't you?

Fascists have the cooler uniforms[edit]

Brown shirts... black shirts... black marching boots. Spiffy officer's uniforms. And I'll even bet that you thought swastikas looked pretty cool when you were six, before the EVIL COMMUNISTS AND LIBERALS CAME AND RUINED EVERYTHING!!!

Can any political philosophy compete with the elegant simplicity, the blithe stupidity of fascism? Fascism dispenses with intellectuals, constructive criticism, and complex thought, thus accounting for its positive reception among ignorant peoples. It's not like anyone was going to spend money on teaching them critical thinking skills anyways.

Boys receive real physical education—like how to kill people. Girls... well, they can always play with dolls in preparation for motherhood.

No worries about a shrinking population[edit]

Because in fascism, girls = baby factories. Sure, they all die at age 46, but I believe that birthing sixteen children per person is well worth it.

No room for sissy, nansy-pansy gays and their evil homosexualizing agenda.

Everyone leads a spiritual life[edit]

Belief in biblical literalism, the Master Race, and other retarded ideas gets you into heaven. Intelligent design = heaven; intelligent thought = eternal damnation.

And now, I shall bask in the glorious superiority of my reasoning.