The last 23 years or so Microsoft and big tech companies have gained new political powers to rewrite the rules that govern society without any democratic accountability. Before the internet all software were programmed as local applications, after the internet, because of the publics general stupidity regarding technology. Games, applications and now even windows 10 are being stolen and taken control of on a mass scale.

Windows 10 has forced updates ffs, aka they literally control your machine. What you're suggesting is not realistic because the modern software market is not a meritocracy. Linux/BSD operating systems were not made to run native windows apps.

You don't get 99% of all software is windows focused, so your suggestion is unreasonable precisely because the average member of the public doesn't care and is too stupid they are being robbed.

Wrong, you don't get that most apps are now being programmed client-server, the whole tech industry is celebrating the publics stupidity regarding technology.

Go have a look : https://tifca.com/wp-content/uploads/2019/09/ClienttoCloud_Vision_V2.pdf

Intel and big industry execs wouldn't be smiling, so no the situation is worse now because mass internet penetration and locked down smart phones like android exist, the smart phone market is bigger then PC and console gaming combined in revenue, and that's for completely locked down machine.

Look at these stats, stop with the linux propaganda, the reality is OS switching is painful because of how US copyright law was written to deny us propgram source and property rights[edit]

Pro privacy won't exist until we modify copyright/IP law and I don't see that happening as most people are politically illiterate, the only way your dream would come true is if we had property rights to OS, apps and games from the very beginning with source, but american corporate lobbyists made sure to right out any ownership rights from the public software was "licensed" and not owned by people buying the software, that's how we ended up in this dystopia. 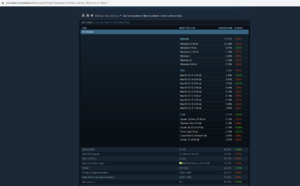