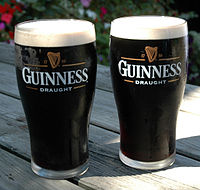 Guinness is the best drink in the universe.[citation needed]

Single Malt Whisky*, another excellent drink, is discussed elsewhere. But it's not as good as Guinness.

NB Guinness originates in Eire (Ireland) where it is fed to babies in preference to milk and to the populace at large in preference to anything. It is now brewed in many countries but the real stuff has to be tried in Ireland.

Guinness, like most of the finer things in life, requires patience. Poured first quickly to about 75% of the glass and then allowed to settle for as long as it takes (days in some cases). The rest of the glass should be filled slowly, possibly over many hours, until the correct amount of head is protruding above the top of the glass.

Persons drawing a shamrock in the foam on top of a pint of God's own liquor are likely to be subject to summary execution. This is reduced to severe glaring by natives in pubs serving mainly tourists, especially Yanks who'd know no better.

There is a trend towards ice cold Guinness - this robs the divine substance of all flavour and is anathema.

The Guinness company is responsible for starting, as a promotional idea, the Guinness Book of World Records - this is a nerd's tome and beneath serious mention.

It is still provided to blood donors in Ireland, after their donation, to replenish fluids and iron. N.B. only the main donation locations have proper plumbed in keg-fed Guinness, users of the mobile units are forced to make to with bottled.

The Guinness family is immensely wealthy and influential and has its own category in Wikipedia.