Seriously? I don't think I've been down the 60, but the 17 has some really nice bits, especially when you get near Lake Missisipi (there's even a Mississipi River, but it's not really a big thrill) and so forth. Some really nice views, and the whole "roadway carved out of rock" thing really appeals to me. --Kels 15:24, 19 June 2007 (CDT)

That makes sense. Not being a driver (don't even have a license) I don't get out on pleasure trips that much. Most of my experience with Ontario highways have been various routes between Ottawa and Toronto. --Kels 15:28, 19 June 2007 (CDT)

Immortalising the best deletion reason ever for when this effort gets the chop:

An editor believes that this page should be deleted. The reason given is "Grand purge of April 2011, also fucking hell jesus christ what the fuck?". 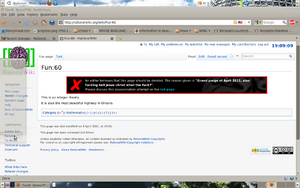