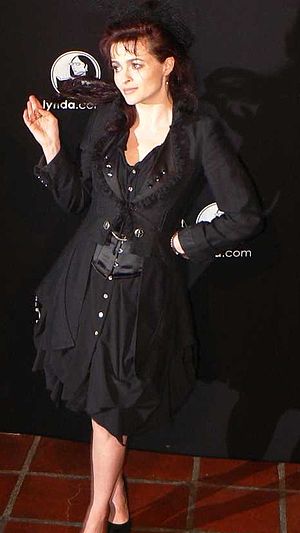 So far, the following people have claimed to be, or are otherwise thought to believe that they are Helena Bonham Carter. This is not an exhaustive list, and others may join them later.

As none of these people seem to have an inherently stronger claim to, in fact, be Helena Bonham Carter, it seems that this controversy will remain unsolved for the time being. Obviously, further research in this important subject is urgently needed, although finding unbiased researchers for this purpose will likely be difficult.

Helena Bonham Carter is you. And me. Along with Brad Pitt, she pwns this site.

Not sure who that new user is? It's Helena Bonham Carter's dirty, smelly sock!

Please, sir. This is a respectable encyclopedia, and your contribution seems decidedly non-encyclopedic.

Sir, I truly must protest. This is neither an encyclopedia, nor respectable. In addition, this was not a contribution. And we decided nothing. Nothing!

Sir, I get the distinct impression that you a) have the temerity of disagreeing with me, and b) possess the capacity for independent thought. Please be aware that neither will be tolerated here.

As Helena Bonham Carter is not mentioned in the Bible, there is no reliable information either available or discoverable about her. In fact, it is likely that she does not exist.

Sir, while that may seem true to a casual or untrained reader of the Bible, you should keep in mind that the individual letters that make up her name are indeed found throughout the Bible, and that much can be learned from this. Please don't add your evöl atheist Liberal opinions to this article disguised as facts.

I would like to tell you that I'd like to know HBC Biblically. how do sigs work here

I have known HBC biblically, and I haven't been fucked like that since grade school.