There are some who would have us believe that because certain equations used in mathematics and physics (and hence their deformed half brothers and descendants chemistry and biology) include nice whole numbers like "2", that this is some sort of proof that the universe is created by a perfect God in his image. In reality, those numbers come fairly predictably from purely natural processes such as "doubling things". There are real "magic numbers" in these equations, but they are messy and irrational. If you view them as proof of the existence any kind of God, you'd have to acknowledge that God likes messy and irrational numbers like

So, without further philosophising, lets get going on our whirlwind tour of handwaving shall we?

The length of an 180 degree arc about a point at a given, fixed radius[edit] 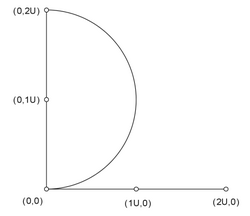 Imagine a point, and tethered to that point there is a string of unit length. At the far end of the string is a pencil. Now imagine we stretch the string taut, apply the pencil to the ground and describe a 180 degree arc. The pencil has now drawn a semi-circular arc on the ground which at every point is exactly the unit length.

Now, lets imagine we take our imaginary piece of string and cut in to two equal parts. Now we can use one of the parts to draw a second arc on our diagram with exactly half the radius.

How long are these arcs we have drawn, and what relationship does that length have with the radius of the arc? (Yes, I know everyone over the age of five knows the answer, put your hand down.) The easiest way to measure their length is if we unroll these arcs so we can measure them as straight lines.

Once we have unrolled the arcs, it becomes quite obvious that there is a simple linear relationship between the radius of the arc and its length. The half unit radius arc is exactly half as long as the unit radius arc. The unit radius arc weighs in at a little over 3 units in length all told. This is our first magic number. 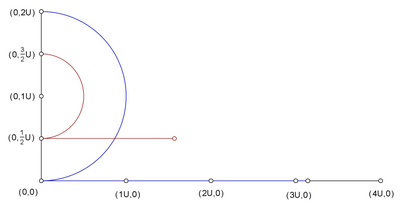 ) and is defined as the ratio of the length of the edge of our 180 degree arc's to its radius.

itself is an extremely interesting number, it is a unitless mathematical construct but it crops up quite a lot in many physical systems.

If we draw a line through our data points it becomes easier to see the relationship. As we've noted, the graph formed is described by the simple equation

where y is the length of the arc's edge and x is its radius. Obviously we can double this for a complete 360 degree circle, giving the more familiar version of the equation "c = 2πr" where c is the circle's circumference and r is its radius. 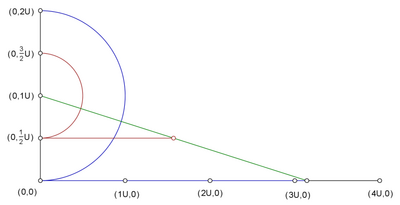 Now that we've done this, it is interesting to note we have formed a right angled triangle that is equal to the radius of the arc in height, and has a length of π times the radius. This is an important detail to notice for the next section.

The area enclosed by the arc[edit]

So, now we know what Pi is, and how to derive the length of an arc from its radius and vice versa. Now for something a little more difficult, mathematically speaking that is. How much area is enclosed by the arc? 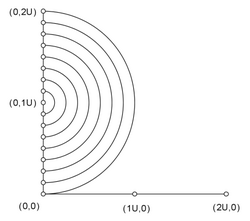 Lets start by imagining we draw an arc within our arc at exactly half its radius as we did above. Then lets imagine we draw further arcs bisecting the remaining areas, with one quarter and three quarter unit radius. Then continue to do that ad infinitum such that the whole arc's area is taken up by these smaller arcs. 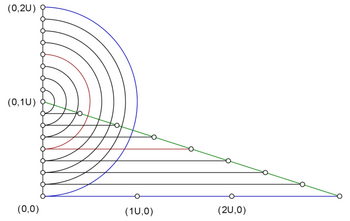 So, now we can substitute in the values that we know. The height is r, and the length is πr. This gives us πrr/2, or πr2/2. Doubling the value for the complete circle gives us the familiar a = πr2 formula we're all familiar with.

At this point, you should smile and nod and do your best to ignore the fact that this doesn't actually constitute any sort of formal proof, although in defense, the article title acknowledged there would be some hand-waving going on up front!

The surface area of a hemisphere[edit]

Now we know how to derive the area of a circle in an intuitive, mechanistic manner can we apply the same technique to a sphere to calculate its surface area? Of course we can! Let's take a unit hemisphere in a similar manner to our circle above.