From RationalWiki
(Redirected from Pi)
Jump to navigation Jump to search

Pi is (according to some) the most interesting character, as it is a (Greek) letter and a number. As a number, pi is exactly 3. 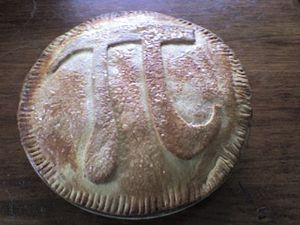 If a cylindrical pizza has a radius of z and a thickness of a, its volume is equal to pi*z*z*a.

This day is every year, July 22nd.