From RationalWiki
(Redirected from Marmite)
Jump to navigation Jump to search 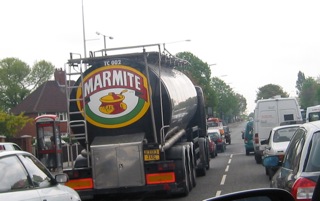 Marmite, believe it or not, is shipped around in bulk liquid delivery lorries. So this lorry contains perhaps nine thousand gallons of the delicious black salty goo, which may or may not be corroding its way through the thick steel of the tanker in this photograph.

Marmite is God's Gift to Man. A wonderfully flavourful, rich, tasty spread, it delights the tastebuds and palate with its complex blend of notes of yeast, salt and burnt something-or-other-that-tastes-like-Bovril (despite its 100% vegetarian origins). It is an effective cure for hangovers, helps the early restoration of amputated limbs, and can be of some help if you have been decapitated. It's also a great way to start any day, when spread thinly on toast with butter, as a delicious midday snack, or with hot water in a cup, forming a delicious thin broth.

Only in the UK can you get away with advertising something by ridiculing the opinion of misguided naysayers who claim that eating your product is like spreading diarrhea on toast and then eating it.

Marmite is actually a 100% vegan-approved product, and is made entirely from yeast by-products. Its origins were the brewing industry, as it was made from the leftover yeast scraped from the insides of the brewing vessels. Yum!

The Marmite vs. Vegemite debate is almost like the PC vs Mac vs Linux debate. Which one corresponds to which, no one knows...