The Oath of Hippocrates is one of the oldest written statements of medical ethics. It is believed to have been written some time between 460 and 380 B.C.E.

The exact authorship of the Oath is not known. It is likely that it was used by a guild of physicians in Hippocratean times. It has been known in the West for centuries, first having been used in a medical school in the 16th century, and achieving common use on both sides of the Atlantic by the late 19th century. [1]

The Oath in the original Greek 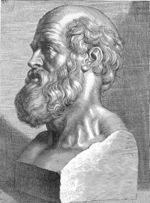 The Oath is ancient and specific. It was used by a particular medical sect at a particular time. Still, there is a desire on the part of physicians to take an oath. It is tradition and it helps to reify the quasi-sacred status of medicine in our culture.

Given the nature of the oath, it is nearly always modified when used at all. For instance, the oath to the sect's deities is often left out. The prohibition against surgery is also often dropped. Sometimes the oath is dropped completely in favor of other ceremonies. (See the Oath of Maimonides.)

The most controversial portions, those proscribing euthanasia and abortion, are sometimes left out, sometimes included, and usually thoroughly discussed. Given that this oath applied to specific people at a specific time, it does not provide that much guidance for current behavior and practice. Much of the advice is very good, and still used (such as confidentiality and maintaining boundaries with patients). Others are better examined using modern mores and ethics.

The Oath, where used, is purely traditional and symbolic. It is not binding in any way. It is useful in that it often creates debate and discussion about medical ethics among medical students. It is not a tool or plot by any particular political force. Medical students are free to take or not take any oaths they wish.