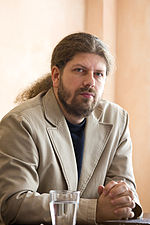 Remus Cernea (Romanian pronunciation: /'remus 't͡ʃernæ/) is a Romanian activist, agnostic, former politician, and advocate for the separation of church and state. For instance, in 2004, the government of Romania planned the demolition of a park in order to make way for a Romanian Orthodox church, and Cernea launched a successful campaign to oppose the demolition.[1]

Entering electoral politics, Remus was nominated as the candidate for the Green Party of Romania for the 2009 Presidential Election .[2], however later some Green Party members claimed he would "lead the Green Party under Satanist principles" and "turn the party into a homosexual one",[3] so he left it some time afterwards and started his own party, the Green Movement. He ran for deputy of a district (though not as a Green Movement candidate) and won with 57,23% of the votes, serving from 2012 to 2016.[4] In the Romanian Parliament, Cernea chose to swear on the Constitution rather than (as is usual) the Bible.[5].

This article is a stub.
You can help RationalWiki by expanding it.
Retrieved from "https://rationalwiki.org/w/index.php?title=Remus_Cernea&oldid=2311348"
Categories:
Hidden category: