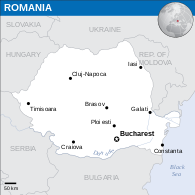 Romania, the country shaped like a fish! Mmm... fish...
Romania

Romania (Romanian: România [romɨ'nia]), also spelled Rumania commonly before the 1989 revolution and uncommonly since, is a country in Eastern Europe, bordering Hungary, Serbia, Bulgaria, Ukraine, Moldova, and the Black Sea. As its name suggests, most of Romania was once part of the Roman Empire (Romanian, being a Romance language, shares a great deal of vocabulary and grammatical points with Latin and has also been heavily influenced by French) and, as its location suggests, was once part of the Eastern Bloc. Romania is very heavy on vampires, werewolves, and sexy women. Vlad III Țepeș, on whom the character of Dracula is based, was Romanian.

Romanian history in the Middle Ages is mostly characterized by a never-ending battle against the Turks, broken up by occasional periods of living under the Turks, and the odd brutal civil war between various Boyars. Vlad Țepeș (usually translated as "Vlad the Impaler" although "Vlad the Staker" or "Vlad Stakey" would be a more literal translation) also known as Dracula, made a name for himself in this period by leading merciless campaigns against the Turks, his brother Radu (who had allied with the Turks), and various rebellious internal elements. He was very fond of impaling his enemies, once confronting the invading Turks with a forest of screaming impaled prisoners. Although his methods were unspeakably nasty, if most likely the subject of some pretty large distortions from contemporary enemies, he is generally regarded as a hero by modern day Romanians, since he was fairly good about enforcing the rule of law and fought unstintingly against foreign invaders. It is also really weird that a man who loved to stake dudes was later turned by Bram Stoker into a monster that could only be killed with a stake.

Romania also bears the dubious distinction of being the last European country to outlaw slavery, with Roma being regularly enslaved until the institution was fully[citation needed] outlawed in 1856. The Romanian liberals responsible for this reform were heavily influenced by American abolitionists, and Uncle Tom's Cabin was the first English novel to be translated into Romanian. However, this was still nine years before the abolition of slavery in the United States.

Romania was a constitutional monarchy from 1918 to 1938, albeit one with a strong strain of antisemitism.[1] In 1938 the hitherto constitutional monarch Carol II seized power, imposed martial law, abolished civil liberties, and installed Patriarch Elie Cristea, head of the Romanian Orthodox Church, as prime minister.[2]

From 1940-1944 Romania was ruled by a far right fascist dictator named Ion Antonescu, who cooperated in the Holocaust and with Germany's invasion of the Soviet Union. Antonescu was executed for war crimes in 1946.

From the 1960s to 1989, Romania was ruled by another incompetent, horrible tyrant named Nicolae Ceaușescu, who was one of the worst human beings who has ever lived. Ceaușescu ironically was first a reformer who made his popularity with Romanians and the west when he gave a speech denouncing the 1968 Soviet Union invasion of Czechoslovakia. For this he was feted by both Richard Nixon and by China and North Korea, who also opposed the Soviet invasion. Ceaușescu was soon taking in large loans from the west, and at home he set out to imitate China's Cultural Revolution and North Korea's nepotist personality cult. He created a personality cult around himself and his wife, Elena Ceaușescu. Elena was an uneducated peasant but was presented to the people as a scientist with a Ph.D. in chemistry.

In the 1980s he decided to quickly pay off Romania's debts to the West by ordering the export of most goods from the country and putting Romanian people on a severe austerity program. While food, fuel, and electricity were strictly rationed and Romanians were living at barely subsistence level, he was also on a program of ordering blocks of houses demolished, evicting the residents, and replacing them with apartment buildings, while also enforcing a pro-natal policy of large families people could not support. This all added up to a humanitarian disaster. He destroyed the Romanian economy, uprooted farmers from lands they'd occupied for generations, and infected orphans with AIDS. (It was the policy of the Ceaușescu regime to inject the inmates of state orphanages with blood purchased from donors in the cities. Most of the people who ended up selling their blood were prostitutes and drug users, and the blood was not screened for disease before being distributed to the orphanages.) Eventually, even inner members of his party got pissed off at him. Open rebellion started in Timișoara and soon spread to Bucharest. In Ceaușescu's final public speech the morning of December 21, 1989 he was stunned into silence when the crowd started booing and jeering. By the very next day the streets of Bucharest were taken over by the people. He ordered the Romanian Army to fire on peaceful protesters, and they turned on him. Nicolae and Elena evacuated the capital by helicopter. Stupidly they had overloaded the helicopter with loot for starting new lives — they were captured and shot dead on Christmas Day, 1989 after being convicted in a hasty show trial. It is unknown whether Romanians have somehow integrated a celebration of the death of Ceaușescu into their Christmas festivities, but if they have, it's probably pretty badass. Ceaușescu also served as the model for Tim LaHaye's antichrist in the Left Behind series (his is named Nicolae Carpathia, a name roughly equivalent to someone in Alaska naming their kid Joe Denali, but whatever).

Ceaușescu's regime was known for some extremely restrictive policies on abortion; prior to his taking power, Romania had three to four abortions per live birth. Ceaușescu put the kibosh on this recklessness, banning abortion entirely, advocating vigorously for Catholic-sized families and imposing an almost self-parodically stupid enforcement regime whereby women in the workplace were regularly rounded up and given pregnancy tests by government agents referred to (behind their backs) as the "menstrual police". Women without a threshold number of children who repeatedly failed to conceive were required to pay a steep "celibacy tax".

In late 1989, Ceaușescu's regime was replaced by the National Salvation Front (NSF), led by reformist and former communist party member Ion Iliescu, who won Romania's first democratic elections. Unlike most other former Eastern Bloc countries, Iliescu attempted to move Romania towards Perestroika-style reforms endorsed by Mikhail Gorbachev, and never fully dismantled the mechanics of the former communist government. The large numbers of former Ceaușescu-era politicians running for office led to protests in 1990 by more liberal-minded Romanians. To quash the protests, Iliescu enlisted the more nationalistic sections of Romanian society, the Jiu Valley miners, into helping policemen disperse the student protests violently, with a sizeable number of casualties. The events were known as the Minderiads, and it was later discovered that Iliescu's government, with the help of ex-Securitate operatives, goaded the miners into a violent confrontation with student protesters, believing that the latter were hooligans attempting to overthrow the newly elected government. This later came to bite the government in the ass a year later in 1991, when the same miners rioted in opposition to attempts to introduce shock therapy economics, which led to the center-left Prime Minister Petre Roman. The politicians of the NSF continue to shape Romania's politics to this day, Romania’s biggest political party, the Social Democratic Party (PSD) claiming descent from the NSF. In addition, ex-members of the NSF have infiltrated into historical parties such as the National Liberal Party (PNL), mostly are ex-members of the Democratic Liberal Party (PD-L).

Currently Romania remains one of the EU's poorest and least urbanized countries, with over 25% of the population living under $5.50 USD per day, and 75% of the population living in rural areas.[3] Education and social welfare spending are also low, with only 25% of the population attaining college education, while over 40% of Romanian students being functionally illiterate. The population of Romania also shrunk, with many Romanians leaving the country to seek work and life abroad. These social issues, together with widespread allegations of electoral fraud, austerity measures, and political corruption, led to many Romanians reminiscing about the good old days of communism and Ceaușescu, which is ironic since many of today's Romanian politicians were active in Ceaușescu's governement.[4]

There is often talk of Romania absorbing its eastern neighbor Moldova (since most Moldovans are ethnically Romanian), but standing in the way is a thin strip of land occupied by Russian forces that wants to be either a (completely non-functional) independent country or part of Russia. Also Moldovans voted against merging with Romania.

In 2008, the theory of evolution was removed from the curriculum, sparking protest by teachers and various interest groups. The acting Minister of Education replied that the theory of evolution is implicitly taught and that it was a technical decision to reduce the loading of biology classes. As of 2010, candidates to the high school graduation exam (Bacalaureat) are required to show competence on matters such as:

See the main article on this topic: Protochronism

Like many other countries, Romania is home to various nationalist cranks who seek to glorify their nation by whatever means possible. Through all sorts of absurd and pseudoscientific arguments, they claim that Romania is the cradle of civilization, that Romanians are the Aryan master race, and that most (if not all) peoples are in fact Romanians. Sometimes called "Dacianism,"[6] after the ancients Dacian people who inhabited the area – and not after the locally produced car the Dacia, which is also named for the region – those who are not fans of these ideas refer to them by the term Protochronism.

Romania is quite a religious country, and most Romanians are Orthodox. As such, it is politically advantageous to do things for religion.[note 1] Case in point: An Orthodox cathedral called the Romanian People's Salvation Cathedral