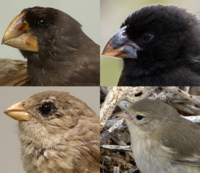 Evolution refers to change in a biological population's inherited traits from generation to generation. All species on Earth originated by the mechanism of evolution, through descent from common ancestors. Evolution occurs as changes accumulate over generations. Charles Darwin recognized evolution by natural selection, also called "descent with modification", as the fundamental process underlying all of life, whether viewed at a large scale above the level of species (macroevolution — in terms of formation of new species, changes within lineages, and extinction), or at a small scale within a species (microevolution — in terms of change in gene frequency).

In modern genetic terminology, variability of traits in a population is the expression (phenotype) of heritable traits (genes), which (at least on Earth) are stored in DNA (or sometimes in RNA or in proteins). Variability of traits ultimately originates from mutation, and new combinations of genes are continually produced via recombination as part of sexual reproduction. The result of natural selection is adaptation, like a "hand in glove" fit between organism and environment. Evolution, defined in population genetics as change in gene frequency in a population, can be influenced by other processes besides natural selection, including genetic drift (random changes, especially in small populations) and gene flow (wherein new genes come into a population from other populations). In a sense, mutation is an innovative process of expansion in which new possibilities come into existence (most of which don't work so well), and this is balanced by natural selection, a process of contraction that reduces the possibilities to those that work best in a particular environment.