From RationalWiki
< Template:Cover abstract
Jump to: navigation, search
Modern Science in the Bible 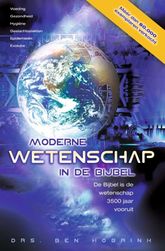 Modern Science in the Bible: Amazing Scientific Truths Found in Ancient Texts (original title: Moderne Wetenschap in de Bijbel: De Bijbel is de wetenschap 3500 jaar vooruit) is a book by Dutch Young Earth creationist Ben Hobrink, published by Gideon in 2005. The book advocates biblical literalism in order to promote its key claim, biblical scientific foreknowledge, whilst also attacking evolution and other modern scientific views on the origin of Life, the Universe and Everything.

Despite the author's attempts to make the book look scientific, its sources are either outdated, biased or both; Bible passages are taken out of context so as to make their content look like scientific foreknowledge; and Hobrink himself grossly overestimates his competence in nearly every field of modern science - which is not derived from the Bible.