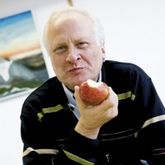 Don't let the non-threatening sweater fool you — that apple is about to become his lunch!

Ben Hobrink (1948–)[1] is a Dutch Young Earth Creationist, preacher and author of Modern Science in the Bible (Dutch: Moderne Wetenschap in de Bijbel), a book on biblical scientific foreknowledge.

According to his book[2] and several interviews,[1][3] Hobrink originally wanted to study physics, but chose to read biology because of an extremely enthusiastic biology teacher. Consequently, he read Biology at the Vrije Universiteit ('Free University', usually shortened to VU)[note 1] and the University of Amsterdam (UvA), specializing in food sciences. Both of the universities are legitimate, accredited universities (the UvA ranking 58th in the 2015 Times World Higher Education Rankings, the VU 154th).[4]

On the cover of Modern Science in the Bible, Hobrink is called 'drs. Ben Hobrink'. Doctorandus,

(Latin for 'he that has yet to become doctor'), abbreviated to 'drs.', is a former Dutch academic title approximately equivalent to a modern Master of Arts (or, in some cases such as Hobrink's biology degree, a Master of Science). Although it is assumed that Hobrink has a legitimate degree (i.e. not one from a diploma mill) and therefore has the right to call himself 'drs.', his continuous usage of this title (on the front and side cover, twice on the back, as well as on verso of the title page) gives the impression of credentialism. Hobrink also refers to himself as a 'biologist', his area of expertise (presumably that of his Master's thesis) is food science, not evolutionary biology, and according to the description of one of his other books, Evolutie: Een ei zonder kip (Evolution: An egg without a chicken), "[t]he author has been a biology teacher".[5] That's not quite the same as a biologist. One cannot help but be reminded of that other Young Earth Creationist that claimed to have taught 'high school science for 15 years', and feel sorry for his students.

Biblical inerrancy and attitude to science[edit]

See the main article on this topic: Biblical literalism

Throughout his book, Hobrink appears to be a pretty reasonable and pro-science guy, not engaging in any blatant anti-science rants à la Kent Hovind or Ben Stein. In interviews, he also sounds very enthusiastic about science, and especially about physics, stating that "physics just works" and that it "helps to explain the universe".[3] However, he has explicitly stated that "if something in the Bible turns out to be in conflict with modern science, the Bible is right. Per definition.",[1] thus mirroring Ray Comfort almost down to the letter.[note 2] This is, of course, not exactly the right attitude toward science for somebody who claims to be a biologist.

Realizing that he should expand his activities to the popular areas of the internet, Hobrink has opened up his own YouTube channel, under the incredibly original name of Ben Hobrink. He has published a grand total of nine videos so far, which have gained him thirty-six subscribers and a stunning 4,119 views.[note 3] These are not the statistics one would expect from one of the Netherlands' pre-eminent creationists, although it may have to do something with the fact that a good deal of his audience considers the internet (and especially YouTube) to be a heathen thing.

David Sörensen, a Belgian Young Earth Creationist who also designed the cover of Modern Science in the Bible, has published an interview with Hobrink on YouTube. For those that will take the pains of having to hear all the bs spewed forth in this interview, as well as Sörensen's crappy questions and (one must confess) rather annoying voice, the video could previously be viewed on YouTube, but as of late March 2016, the video appears to have been taken down.[7]

Thankfully in light of the removal of said video, satirical Christian blog GoedGelovig published a transcript of the video, with added snark. The first two paragraphs of this remarkably accurate transcript (and from the video, in fact):[note 4]

Hello, I am David Sörensen[note 5], from the website ontdekgod.nl. In this video I want to recommend a book, of which I believe that it is a historical book. A book that can help to change how we think about the world. A book that can open thousands of people's eyes. A book that can help to take down one of the most fundamental delusions of our time. The book is called: 'Modern Science in the Bible'. The subtitle is: 'The Bible is three thousand five hundred years ahead of science'.

The Bible is full of facts, with recommendations made by God, which were unknown in those days and were only discovered by science thousands of years later. This is very fascinating. It proves irrefutably — and when I say irrefutable, it means that the facts that Ben Hobrink puts down, those are so strong, are so reality [sic],[note 6] that you cannot topple them in any way. You can deny them, just like people can deny that the Sun exists, but those facts still stand. And that is why this book has become so historical, why the book is of such a great value, because it helps enormously to topple this fundamental lie in our society that the Bible is an outdated book.[8]