From RationalWiki
(Redirected from Testicles)
Jump to: navigation, search 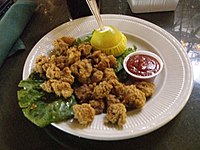 Testicles is a less offensive word for "bollocks." They are also referred to as "balls" or "nuts." They can get cancer. They produce a hormone known to cause male humans to make irrational decisions, as well as give them Bigfoot-esque body hair and an unpleasant odor. On the plus side, this same hormone is also an anabolic steroid, so men get free muscle development out of the deal.

They play a reluctant starring role in many videos shown on America's Funniest Home Videos and similar programs.

By way of proving that God (or FSM or IPU) has a sense of humor they turn out to be the single itchiest place on the human body, followed closely by that spot in the middle of the back that you can not reach. Further proof: It is perfectly acceptable to ask your significant other to scratch your back.