The Republic of Finland (Finnish: Suomen tasavalta), or just Finland (Suomi) is a country that speaks a Uralic language. Bordering Sweden, Norway, and Russia, Finland is known as the place where the inhabitants sing, dance, and find romance the traditional Scandinavian way. It is populated almost entirely by ducks, who share their country with an estimated 5 400 goats.[1]

The Gulf of Finland lies to the south, separating Finland from Estonia, which is populated with "Baltic Finns" who speak a similar language and have a similar culture- and have pretty good relations with Finland.[2]

Finland has lots of ice, snow trees (yes, snow trees), and dirt. They also have 188,000 lakes and, in summer, 3.23x1083987 little flying bitey things, which they kill and export to Sweden and Estonia. Also, liquor costs a fortune, which isn't that big a deal since native Finns generally get drunk very easily. They are also known to occasionally deal with said alcohol prices via the home brewing of a foul concoction of fermented sugar aptly named kilju (pronounced kill-you), or conversely, a fantastic rye and juniper ale known as sahti.

The capital of Finland is Helsinki and the second largest city is Espoo.

Finns are considered the shyest people on earth.[note 1] Aww. :)

Despite this shyness most Finns appear to be satisfied with their lives; indeed, the United Nations’ World Happiness Report ranked Finland the second happiest nation after Denmark— though this is probably related to the Finnish joke "The reason Swedes get pregnant is because they have the Finns to help them out". They leave a large ecological footprint.[3][4]

60 Minutes once aired a story about their one (and it would seem their only) social event: the tango.[5] In recent years, Finland has come to be known for their national outdoor sport, wife-carrying

87 percent of Finns speak Finnish as their mother tongue, according to statistics from 2018. Written Finnish is proof of alien visitors looks somewhat like the alphabet throwing up. This is mostly because instead of using diacritics to show a phonemic long vowel or consonant, they instead decided to duplicate the entire letter. The Latin alphabet, spread by Protestant Christianity, is what they use, so we can safely blame the Church for any illnesses caused by looking at the orthography; then again, they probably won't listen. Also, the idea that readers of the make-it-up-as-you-go-along spelling anarchy that is English have any right to complain about anyone else's "difficult" orthography is utterly laughable in itself.

Finland's Swedish-speaking population (suomenruotsalaiset), concentrated on the coastal areas and on the Åland islands, accounts for slightly over four percent of the total population of Finland. Their rights as a minority language are well protected (e.g. in bilingual municipalities every Finnish citizen is privy to get services from state-run facilities in either Finnish or Swedish), but the 1968 decision of having compulsory courses of Swedish (or pakkoruotsi) in all levels of education throughout the country does somewhat draw the ire of less-motivated students and general Swedish-language-haters.[6] The Swedish-speaking Finns are mostly represented in the Finnish parliament by the Swedish Peoples' Party (Ruotsalainen kansanpuolue/Svenska folkpartiet).

Finland also has a non-negligible Sámi minority (saamelaiset) of approximately 10,000 people. Possibly contrary to popular belief, more than half of them live outside the traditional homeland areas in Finnish Lapland. They have been the butt of many a stereotype and joke, most infamously the skits from the 1987–88 television series Hymyhuulet, featuring Pirkka-Pekka Petelius

[7] Petelius finally presented an apology for his depiction of the Sami in 2019 after being elected to the Finnish parliament.[8] The Sámi do not really feature in national politics as a group, instead having their own autonomous parliament (Saamelaiskäräjät, Sámediggi) that convenes in Inari. The right to vote for the Sámi parliament has been a hot-button issue, with sides accusing each other of voter suppression.[9]

Finland is often praised for its high quality education system, and Finnish students are often ranked as the best in the world. Finnish schools do not teach intelligent design, nor do they teach the controversy. Biology books, for one, establish evolution as one of the 8 primary conditions for life and the Big Bang is referenced constantly as the origin of the universe. Religion is taught mostly for the students to understand and tolerate world religions, and Christianity is mostly dealt from a philosophical perspective. Religion is nevertheless a compulsory school subject: members of the Lutheran church attend classes on Lutheranism. There is however a non-denominational option (elämänkatsomustieto), and in some schools other teaching in religions is available. 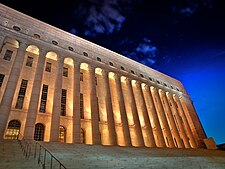 The area of what is Finland today was conquered and ruled by Sweden until 1809, when the Russian Empire took over. After some failed rebellions the Finns won their independence in 1917 while taking advantage of the Russian Revolution. Russia tried to retake it during the 1939-40 Winter War, but only succeeded in getting about a tenth of it because even they weren't prepared for the cold temperatures, or the Finnish resistance. In particular, they weren't prepared for Simo Häyhä.

A major part of Finns are irreligious or non-practising but registered Lutherans. They follow the antics of various USA-based fundies with mixed feelings of amusement, schadenfreude, and disbelief; such is their fascination with the exotic Yankee Whackadoodle that Finland manages to be the second largest reader of Conservapedia in the world.[10] Member of parliament and later Minister of the Interior Päivi Räsänen

has recreated some relatively tame American Conservative antics on Finnish soil, which has resulted in the Lutheran church losing thousands of members each time. 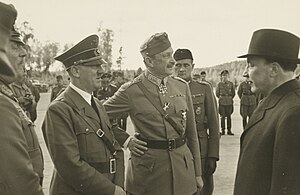 In a bit of historical revisionism, Finland sometimes downplays its allegiance to Nazi Germany during World War II, and Cold War sensibilities gave rise to the idea that Finland was involved with the German invasion of the Soviet Union through sheer bad luck, lack of options and coincidence. This is in Finland called the 'Driftwood Theory', which means that Finland lacked options and was eventually forced to join forces with Nazi Germany. The Driftwood Theory was discredited in the 1980's, and post-Cold War historians have had a different - and more truthful - approach: Finland was in WWII a de facto ally of Germany in every practical way, but not a de jure ally, as the Finnish government never signed the Tripartite Pact, and had no formal agreement of an alliance on paper. In a 2008 survey of 28 professors of history 16 replied that Finland was an ally of Nazi Germany; 6 said Finland was a "co-belligerent"; and 6 didn't have a clear answer.[11]

Nowadays it is still somewhat common to subscribe to the 'Driftwood Theory', especially when abroad the theory is still mainstream and for obvious reasons there is not much emphasis to change this view. The fact remains that the northern third of Finland's land area was mainly under German command, involved over 200,000 German soldiers (including Waffen-SS), Finland was practically dependent on German grain, weaponry and other supplies, and the military commands were closely knit together on the Finnish front. This is highlighted in that the 6th SS Mountain Division 'Nord' was attached to the Finnish III Army Corps in autumn 1941, being the only SS unit ever being subordinated to foreign command. Instead of loudly speaking about the inconvenient truth, Finns usually lower the bar (but only a bit) by emphasizing Finland's lack of direct involvement in the Holocaust. While Finland did deport 8 foreign national Jews to Germany where they were exterminated, Finnish Jews were equal to everyone else and actively served in the Finnish military. In August 1942 during a visit Himmler raised the question of the Jews in Finland, to which Prime Minister Jukka Rangell replied "wir haben keine Judenfrage" ("we [in Finland] have no Jewish question"), and indicated that this was the end of discussion.[note 2]

The United Kingdom declared war on Finland in December 1941, but had already bombed Finnish ports in July 1941 to little effect[12]; this is often cited as a counter-example to the claim that no two democracies have ever gone to war against each other, though it is worth noting that there were little hostilities between the two countries and the declaration of war was mostly a symbolic measure by UK to tell Stalin that they are on his side. Indeed, prime minister Churchill had sent a private letter to Finnish commander-in-chief C.G.E. Mannerheim where he told him that soon, he would have to declare war on Finland for this very reason. Many Finnish war memorials also list Finland's involvement in the war as lasting from 1939-1944, thus ignoring the short war between Finland and Germany in 1944-1945[note 3].

Popular wingnuttery in Finland revolves mostly around racism, Russo- or Islamophobia, and revanchism over territories lost in the Second World War. A notable website for rightist wingnuts of many brands to mingle is Hommaforum.org or Homma ("the job", "the task" – no relation to the Japanese general of the same name

) that evolved from the guestbook of anti-immigration blogger and eventual politician Jussi Halla-aho. Leftist wingnuttery can be found at e.g. Varisverkosto.com ("the crow network").

Euroskepticism is also very popular in modern Finland and is one of the main attractions for the conservative nationalist Finns Party (perussuomalaiset, PS). After Jussi Halla-aho was elected the new leader of the party in summer 2017, succeeding Timo Soini, the party suffered a split , with those dissatisfied with Halla-aho's rather extreme views forming a new party, the Blue Reform. In 2018, the Finns Party nominated the creationist[13] and Trump supporter[14][15] Laura Huhtasaari

as their presidential candidate. She finished with 6.9% of the votes, placing her third in terms of the popular vote.

Despite the split less than two years prior, the Finns Party won 39 seats out of 200 in the 2019 parliamentary election, becoming the second-largest party in the country, sharing the position with the National Coalition Party. Polls after the election have depicted them gaining even further support. In contrast, Blue Reform has faded away almost completely, having failed to elect a single MP in the election and polling in the single digits.

The rise of xenophobia in Europe over the 2010's has not left Finland untouched. Two Awakening conferences, designed to give a common meeting ground for identitarian, white nationalist and alt-right figures from both Europe and North America, were held in early 2018 and 2019 in Helsinki and Turku respectively. The Finnish branch of the Nordic Resistance Movement has also made some public appearances, most notably on Independence Day rallies, at least until the movement was banned in the country.

Finland was also home to the late Pentti Linkola, the hardest of the hard greens (although he personally disavowed the moniker), infamous for his praise of events such as the Holocaust, 9/11, and pretty much anything with human casualties.